Wallabies coach Dave Rennie has confirmed the return of Will Skelton, Rory Arnold and Tolu Latu in Australia’s spring tour squad, while also naming uncapped Waratah centre duo Izaia Perese and Lalakai Foketi for the trip to Japan and the UK.

The Herald revealed the European-based trio had earned a recall in the 37-man squad that will play the final four Tests of the season and the news was confirmed on Friday. 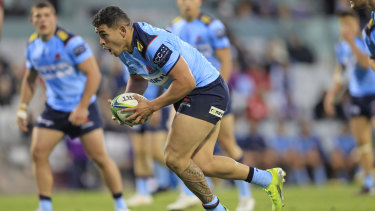 Izaia Perese runs the ball for the Waratahs against the Crusaders in Super Rugby Trans-Tasman this year. Credit:Getty

Skelton hasn’t played a Test for the Wallabies since 2016, while Arnold and Latu were members of the 2019 World Cup squad before leaving Australian rugby to take up contracts in France.

Skelton, Arnold and Latu won’t play in the October 23 fixture against Japan in Oita but will join the Wallabies squad when they arrive in the UK later this month.

The trio aren’t the only fresh faces in a squad that features four uncapped players.

The Herald revealed Waratahs officials had been told that Perese and Foketi were likely to tour.

Perese would have been named in Australia’s squad for Tests against France in July but injured his shoulder in the final Super Rugby Trans-Tasman match of the season.

Yet to make his debut at international level, Perese has been back training with the Waratahs and is eager to push for selection in upcoming Tests against Japan, Scotland, England and Wales.

Wallabies selectors have decided to include Paisami in the group, despite giving some consideration to leave him in Australia after the birth of his child, while Kerevi is expected to be fit for either the Scotland match (November 7) or England Test (November 13) after suffering an ankle injury in Australia’s recent victory over Argentina.

Perese, Foketi, Melbourne Rebels prop Pone Fa’amausili and Brumbies hooker Connal McInerney are the only four uncapped players in a squad that has an average of 25 Test caps each.

As reported this week, playmaker Noah Lolesio has been left out of the squad altogether, as have fellow youngsters Harry Wilson and Fraser McReight.

Lukhan Salakaia-Loto is another notable omission.

The squad consists of 21 forwards and 16 backs.

“We’ve been building as a squad over the past 18 months or so and to get a chance to head to the northern hemisphere and test ourselves against four really strong international sides is a great opportunity to learn more about ourselves,” Rennie said.

“To have a few experienced players from overseas join us will no doubt help our development as we continue to grow and improve as a team, while those back here in Australia will get a decent off-season to make the necessary shifts in their games to excel at Test level.”

Stan Sport is the only place to watch the Wallabies v Japan on October 23 and the All Blacks v USA on October 24 – both matches streaming ad-free, live and on-demand on Stan Sport. Start your 7-day free trial here.

Tags: in, named, Perese, spri, Wallabies
You may also like
Latest Posts