WA Premier Mark McGowan has denied that Perth has clinched the AFL grand final but says his government is working on “very strict guidelines” and discussions were continuing with the league.

As the hope of Victoria hosting finals before crowds took another blow on Monday, with Premier Daniel Andrews extending Melbourne’s lockdown, McGowan said it would also be a “wise” call for the AFL to have all players vaccinated ahead of any matches being held in Perth.

There is also the prospect the entire finals series could be held outside of Victoria, for the AFL wants matches to be played in front of crowds. 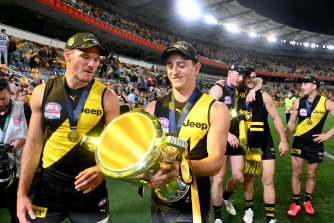 The 2021 AFL grand final, like last year, is most likely to be hosted interstate. Credit:Getty Images

AFL clubs have been told the pre-finals bye has been scrapped, with the week off to be a floating option through the finals. It could be used before the preliminary final or even the grand final, depending on border and quarantine issues for clubs.

The bye had been introduced in 2016 after controversies and integrity issues in previous seasons over the resting of players in the final round of the home-and-away season.

At this point, the grand final will still go ahead on Saturday, September 25, and not be brought forward a week.

When asked specifically about reports his state had clinched the grand final, McGowan said: “That hasn’t been achieved at this point in time but, obviously, we’re working with the AFL on very strict guidelines around all these issues, and I don’t think the AFL has made that decision yet.”

McGowan also said interstate players would not be able to bring their partners and families with them to WA.

“As we said, our intention is that those sorts of groups wouldn’t be permitted to join players coming in, it would be a very strict and tight regime,” he said.

Scrapping the bye allows the AFL to keep the season rolling, at a time when the pandemic is causing fixture chaos and lockdowns across multiple states.

“There is certainly a school of thought that maintaining momentum is important, but we will work with the clubs and players on that, and clearly we have to work out where the finals will be played. So, there is a lot of work going on at the moment,” AFL chairman Richard Goyder said on Saturday.

Goyder and chief executive Gillon McLachlan remain in discussions with Queensland, South Australia and WA governments and health officials about hosting the grand final should it have to be shifted from the MCG because of Melbourne’s extended lockdown.

The AFL and WA government will also have to confirm quarantine plans and hubs.

“They would be decisions that we’ll have to work on with the chief health officer, but I’d expect most footballers, in fact, all, are probably vaccinated, I certainly would have thought that would have been a wise decision by the AFL,” McGowan said.

“But I understand our police and our health officials are working with the AFL at this point in time about what the protocols will be.”

The AFL has been contacted for comment regarding player vaccinations.

Andrews said it was too early to say whether Victoria could host the grand final.

“What I’m most concerned about now is all of us pulling together, finding it within ourselves to drive these numbers down,” he said.

Tags: certain, final:, Grand, not, Perth
You may also like
Latest Posts