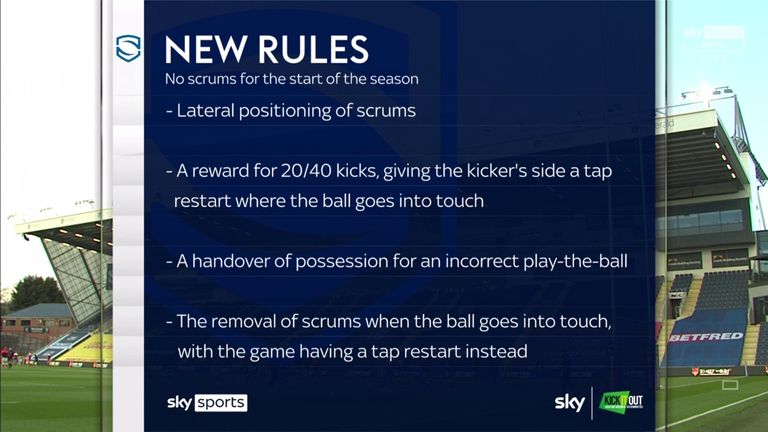 Another season, another set of new rules – and I thought rugby league was supposed to be the simple code of rugby.

The RFL/Super League say that they have been brought in to:

I thought back to the Grand Final of 2020 and wondered what was wrong with that match. It made me wonder who owns the rights to the rules, and what responsibility they should bear to whom?

What do players, coaches, owners, broadcasters and spectators really want? 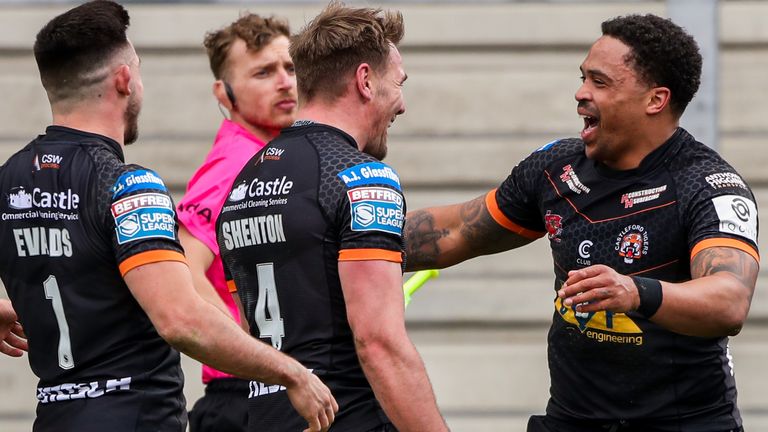 Who said that the game needed to be quicker? What is the problem with the flow – and how will these new rules fix that? What exactly do we mean when we say that we want to improve the spectacle?

There is no mention of player safety here. If you speed the game up, do you increase the risk of more concussion injuries – and are we restricting the number of people who can play?

That has to be one of the most important aspects of any sport. It is also worth noting here that the bedrock of any sport’s fans are the people who play, or have played.

The first rules for a rugby match were written back in 1845. They make up just less than three sides of A4. Online, a Wakefield fan – Nigel Trueman – has put together a brilliant summary of the changes that have been made to the sport between then and 2012. You can see the full ‘Development of British Rugby League’ list here.

Reading some of them made me laugh. 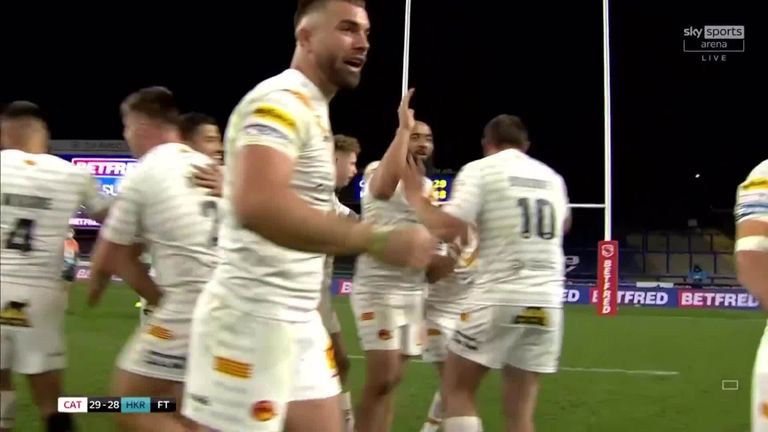 The original “golden point” meant that a match was classified as a draw after five DAYS, if there wasn’t a clear winner!

By the 1870s, the governing body had published a 17-page booklet which were the first real laws of the game. Over the next 100 years or so, there were a variety of changes – until we started to see an increase in the frequency and number of rule changes from the 1980s.

In 1991, we chose to make ball stealing illegal. In 1996, we decided ball stealing was allowed, if it was one-on-one. We then discouraged it again, once more than one defender had been in contact with the ball carrier – before reintroducing it again this year, assuming it is one-on-one at the point of ball theft.

Four changes in 30 years – to one aspect of play. We have some rules, like the one when the scoring side kicks off, which lasted only a year, and others that might last a decade before we revert back to what we had 20 years before.

What research is done before introducing a rule and then removing it 12 months later?

At the same time as I hear so much about making the game faster, we have referees who prevent players from taking a quick tap penalty. Someone, somewhere, decided that you are allowed a quick-tap 20-metre restart – but NOT a quick-tap penalty.

Back in 2008, we decided to ban the loose forward, or player at the back of the scrum, from holding the ball in at his/her feet. This year, they can trap the ball again – and what is even more amazing is what happens if the opposite team breaks early from the scrum in defence (this is of course when scrums return). Not only is it a full penalty rather than a differential one, which I agree with, but the team can elect to have another scrum. They can turn down a penalty for another scrum!

If the defending team breaks early from the scrum a second time, the referee will send the offending player to the sin bin. So we now have a situation in the game where a team can elect to try to get an opponent sin-binned, rather than play the game, once they have been awarded a penalty!

How can that be in the spirit of a sport? What market research was conducted to tell us this is a good idea? 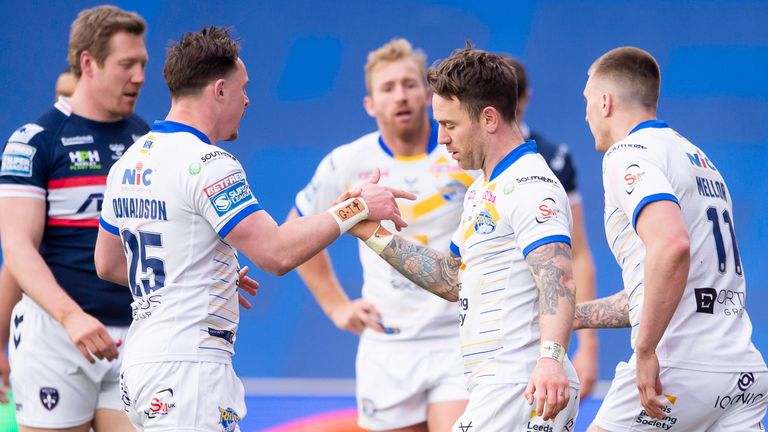 None of us really know until we see this season’s new rule changes whether they will achieve their desired objectives – or simply confuse and over-complicate things. I must trust that the RFL/Super League and the laws committee have undertaken appropriately robust research, and are confident that these six rule changes will deliver. I am looking forward to seeing if this all works out, and I genuinely hope it does.

My initial impression is that some of the changes seem contradictory. The sport has brought in “lateral positions” for the restart at a scrum, where a team can choose whether to have their scrum 10m/20m in from touch, or in the centre of the pitch.

This is designed to help provide a greater attacking situation from scrums. However, at the same time we bring in another rule which means that we have no scrum when the ball goes over the touchline. The game restarts with a play-the-ball when the ball crosses the touchline.

So we introduce change to encourage attacking play from a scrum, and then reduce the number of scrums that we have in a match. Who decided that we had too many scrums? We give a team an extra five or 10 seconds to decide where they want a restart, and then claim we’re trying to speed up the game. Does that make sense?

What we need to do is simplify the game, not speed it up. I saw one of the most experienced referees in this country not know where exactly to restart play in one of the matches in round one. He thought the play-the-ball would be 20m in from the touchline – when in fact it should have been 10m – and fortunately was helped out by either a vigilant touch judge, or the video referee.

And I listened to another referee – who has covered games in the top division for the last decade – spend the entirety of his warm-up testing himself and his touch judges, to see if they could recall the fine detail of the rules in restart situations.

If two referees with that much experience are struggling to cope, what chance do part-time or volunteer officials have in the lower leagues, community, or junior games?

A few weeks ago, I took part as an observer when the St Helens & Wigan Referees’ Society held an online recruitment course for new match officials.

In addition to people from all over this country, there were men and women from Austria, Spain, Poland and Albania who were all keen to learn the rules and become a referee. They were doing this because they love the game and want to be able to referee a match in their home country. 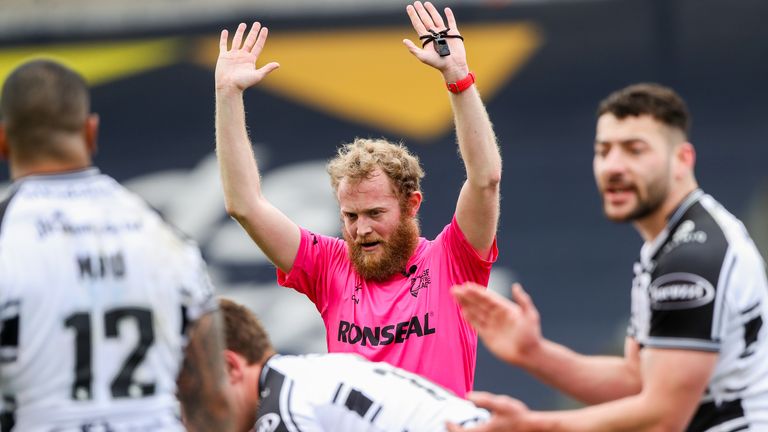 One lady in Tirana was particularly impressive and had spent many hours reading as much as she could about the rules of rugby league. She asked some great questions, like why do the rules say that you must play the ball with the foot – but when she watches the matches on TV, this is not penalised?

She could not find where it was written that a player must have “balance and control” when playing the ball but has heard this said when she sees recent penalties. She was a very intelligent person – and yet could not work out why we use some rules and ignore others.

The first thing that she teaches all of her young players is that they must play the ball with their foot. It was confusing to her why we bring in new rules and choose to ignore some existing ones.

She made the very interesting observation that she thinks it would be simpler if the game just had six tackles every set. In her opinion, it would be quicker for her to explain the rules to her friends who just want to referee a match – rather than saying that sometimes there are seven. She suggested to me that you could simply have a tap on the 30m line to keep it simple.

This made me wonder how many votes the community or junior game gets on the laws committee?

In the long term, we need to make the game more enjoyable to play at all levels. Not just in Super League – but in the women’s, community, junior and schools games.

I’d love to know – and maybe you can share your comments on our @SkySportsRL Twitter page – just what you, the fans and players out there watching make of this season’s tinkering to the Greatest Game.