Former Carlton coach Bolton has left Hawthorn to join Collingwood as director of coaching and, according to the club, will also work specifically with the midfield.

Leppitsch has been appointed as the head of strategy and will also coach the backs. He and McRae have a long-standing relationship; they were premiership teammates at Brisbane and both went on to work as assistants at Richmond under Damien Hardwick. 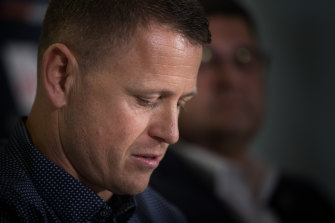 The Magpies are also talking to Geelong legend and current assistant Corey Enright, who St Kilda is interested in. 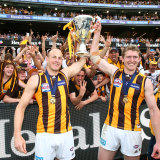 Meantime, Hawthorn has welcomed another three-time premiership player back to the club, with David Hale leaving Fremantle for the Hawks, as the assistant coaching merry-go-round speeds up.

Having spent six seasons at Fremantle as an assistant, Hale joins Adrian Hickmott, Andy Collins and the recently re-signed Chris Newman back at Waverly Park under former teammate and friend Sam Mitchell.

Knights is moving to West Coast to work under Adam Simpson on a three-year contract. Knights was the Cats’ VFL coach for three seasons before taking over as midfield coach of the senior team in 2015.

Long-time Cats CEO Brian Cook is expected to join Carlton as Cain Liddle’s replacement as early as this week, but Cook is yet to make a commitment to the Blues.

If he were to be appointed as Carlton’s new chief, it would add an intriguing ingredient to the Blues’ search for a new coach.

Scott has one year remaining on his contract at Geelong and insiders are questioning whether he would consider an approach from a rival club given the length of his tenure and the state of the ageing list.

Chris’s brother, Brad has also been approached by Carlton, while Alastair Clarkson is still yet to formally rule himself out.

Clarkson has been weighing up his options – including travel and study in the US – for how he will spend 2022 and beyond.

His successor, Mitchell, has been putting together his preferred group of assistant coaches.

Head of football Rob McCartney said the club was excited to secure someone of Hale’s experience.

“David obviously had an outstanding playing career, which he has then gone on to complement with six years’ worth of valuable coaching experience at Fremantle,” McCartney said.

“Through meeting with David a number of times, we’ve become acutely aware that we’re bringing in someone with a very strong understanding of the game and someone who knows how to get the best out of his players.

“We’re really looking forward to seeing the impact that David can have on our playing group as well as our broader football department.”

Tags: add, and, Bolton, Leppitsch, Pies
You may also like
Latest Posts