AFL clubs expect to persist with the Irish experiment, despite two clubs in the past week losing players who were on their category B rookie list in 2022 after they decided to remain in Ireland.

The pandemic, the subsequent soft cap on football departments and a reduction in the number of category B rookie spots to two has made recruiting such players more challenging, forcing clubs to consider carefully the value of bringing young men from Ireland to play AFL. 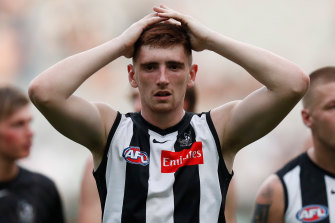 Mark Keane chose not to return to Collingwood to resume his AFL career, and will stay in Ireland.Credit:Getty Images

The spotlight is once again on the process after Geelong signing Oisin Mullin decided to remain with Mayo, where he has twice been named Ireland’s young footballer of the year, while Mark Keane surprised Collingwood when he decided not to continue his career with the Magpies. Those calls came a month after Ultan Kelm notified Fremantle that he was deferring his arrival to next season due to a hip injury.

On the flipside, Hawthorn’s Conor Nash this week returned to Australia alongside recruit Fionn O’Hara, who is a category B rookie, and Irish players continue to persist at the Brisbane Lions, Essendon, Geelong, the Giants, Sydney and St Kilda. There are also 14 Irishwomen playing AFLW and making a significant impact on the competition.

Club sources said the global pandemic had obviously made the environment tougher for Irish recruits, with potential difficulties getting in and out of Australia compounded by the lack of state league matches in the past two seasons for those playing with clubs on the eastern seaboard.

The cuts to football departments means each decision to add a player to the list is being considered more rigorously than ever before so that enough resources in coaching and welfare are available, to ensure every player has a chance to succeed.

Opportunities to watch trials have diminished and category B spots are available to academy players.

Sydney premiership player Tadhg Kennelly, who played 197 games with the Swans after joining from County Kerry in 1999, said COVID-19 has upended the established process, adding logistical complications to the existing challenges.

However, he believed the pandemic presented a bump in the road rather than the end of it for the experiment.

“COVID has hit international players more than anyone,” Kennelly said. “I bought into coming out to this country knowing I could go back home whenever I wanted to.”

Sydney’s category B rookie Barry O’Connor has played fewer than half-a-dozen legitimate matches since he joined the Swans two years ago. The chances for players to return to Ireland or for family to come to Australia have been limited during the global pandemic.

Kennelly said he understood how hard it was for Irish players with the pull of home ever present.

“In 13 years there was not one January where I wasn’t feeling sick in the stomach about going to the airport and leaving Ireland. I just didn’t want to do it, every bone in my body was telling me not to do it, but you did it,” Kennelly said. 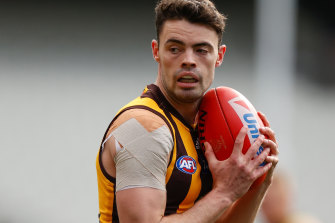 He believed clubs would now consider whether it might be better to bring a star junior player to Australia when they turn 18 before their local roots and connections to county teams are well established, rather than wait until they were older. He also praised clubs that keep in contact with young talent but are prepared to wait until the player decides the time is right for them to leave Ireland.

Despite all the hype and regular flow of players, very few make the grade or see their whole sporting career out within the AFL.

League sources argue their investment is relatively minimal and that only half of all rookies make their AFL debut anyway, so the risk remains viable.

Because players signed as category B rookies sit outside the club’s total player payments scheme, there remains enough incentive for clubs to persist with recruiting Irish players. Players can now be category B rookies for four years as the AFL recognised that COVID-19 had slowed development.

Kennelly said he always told potential recruits that playing an AFL game was not guaranteed as there were many hurdles to overcome, but the experience would benefit both the player and the club.

There is also no doubt among clubs and the league that the Irish influence since Wight’s arrival has enriched the game in ways hard to measure: from Stynes’ record-breaking feats to the humour of Colin Corkery secretly catching trams up Royal Parade rather than do the Carlton 10-kilometre runs, or Adelaide’s Brian Donnelly missing two weeks of training after sunburn on his feet left him unable to run.

The international rules series had been revived, too, before COVID-19 put it on the backburner.

Kennelly said Irish players would remain part of the AFL landscape, with hiccups inevitable in the more complicated environment.