Despite the cautionary tales of Rowan Marshall, Josh Dunkley and Toby Greene remaining fresh in the memory, the AFL on Wednesday gave the green light for players and club staff in Victoria to live freely without lockdown-style restrictions.

After Victoria exited its fifth lockdown late on Tuesday night, the league told club football managers at a meeting on Wednesday that many of the AFL’s “supplementary protocols” would be lifted effective immediately, although players and staff in the state would still be under some additional restrictions until Sunday at least. 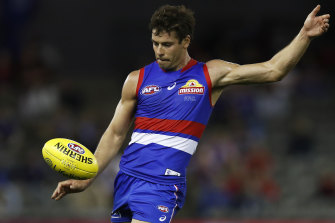 Josh Dunkley was caught up in the recent drama.Credit:Getty Images

This effectively means players and staff of the 10 Victorian and two South Australian teams can live like the rest of the community. They could previously only leave home for five essential reasons: caregiving, essential work (including training and playing), education if it cannot be done from home, medical reasons, and to get vaccinated.

Like other members of the community, players and staff can sit down to eat or drink at a restaurant or indulge in non-essential retail.

Restrictions remain in place while at clubs, with interaction between AFL and VFL programs and between football and administration staff limited.

A host of players and staff from several teams were caught up in Victoria’s recent outbreak, one which led to the fifth lockdown period in the state since the start of the pandemic.

Players including Greater Western Sydney star Greene, Saints ruckman Marshall, Hawthorn’s Conor Nash and Sydney’s Callum Mills all missed at least one game after being forced into quarantine after attending the Australia v France rugby union match at AAMI Park earlier this month, which was named an exposure site.

Bulldog Dunkley was similarly unlucky, caught out when a local cafe he attended became a hotspot.

There have been occasions over the past 18 months that restrictions for AFL players and club staff were more stringent than for other members of the community.

Even before the virus forced the relocation of all 10 Victorian clubs last year, several players including Essendon pair Conor McKenna and Brandon Zerk-Thatcher, Melbourne’s Kozzy Pickett and Charlie Spargo and Collingwood’s Steele Sidebottom and Lynden Dunn were suspended for breaches of the league’s COVID-19 protocols.

Crowds won’t return to games in Victoria for at least the next couple of rounds, with the venue for the grand final – shifted outside Victoria for the first time last year – again in the balance.

Tags: AFL, as, get, lift, Players, Relief
You may also like
Latest Posts