The captain's challenge may have been used for the first time at Saturday's All Stars clash but rival skippers agreed they were no closer to deciding whether it should be introduced to the NRL in 2020.

Maori co-captain Adam Blair created history when he used the on-trial rule in the 65th minute of their 30-16 victory over the Indigenous All Stars to question a knock-on against Kenny Bromwich but was unsuccessful.

The challenge is also being trialled in next weekend's Charity Shield clash before a decision will be made on whether to adopt it for the 2020 season. 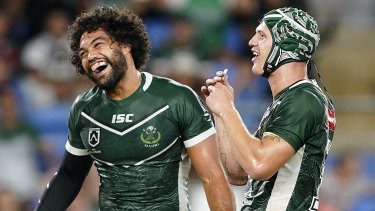 "To be honest unless it is blatantly obvious and something they have missed, it would be good for those times," Blair said.

"[But] you are putting a lot of trust in your players if you are the captain because you don't have time to look up at the [big] screen [for a replay].

"Whether that works or not we will see how they go."

"If it happens on the wing and the captain is on the other side of the field and hasn't seen it, it could be costly," he said.

At least the Maori got the chance to use it. Indigenous captain Joel Thompson claimed he tried to use it during the game but the referee didn't hear him.

"I tried to use it. I was yelling at the referee but he wouldn't even listen to me, [but] all good," he said.

"It is something players need to work on and be more aware of. I have been playing footy for so long and never heard of it before, it's a new thing so we will see how it goes at the Charity Shield."

Tags: after, c, none, Players, THE, wiser
You may also like
Latest Posts