Highly rated young hooker Billy Pollard is making a mad dash to join the Wallabies squad in Argentina after Dave Porecki was ruled out of Sunday’s Test with a head knock.

Porecki, who started all three Tests against England in July, suffered a concussion at training on Monday in Buenos Aires and must now observe a 12-day stand down. That will see the Waratahs hooker miss the first Test against the Pumas in Mendoza on Sunday morning (AEST), but Porecki could theoretically return for the second Test in San Juan.

Folau Fainga’a will start at no.2 for the Wallabies, with four-Test hooker Lachlan Lonergan set to get his first taste of Test action this year with a call-up to the bench. The team will be announced on Friday at 5am (AEST).

Requiring a third hooker as an emergency back-up, Pollard was called up after impressing for the Brumbies this year and in the Australia A team’s campaign at the Pacific Nations Cup in July.

The 20-year-old has played eight games for the Brumbies since debuting last year, in an all-Test hooker rotation with Fainga’a, Lonergan and Conal McInerney. 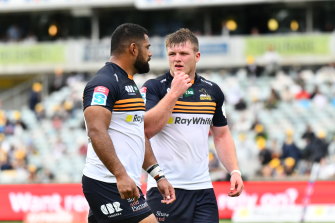 The task of getting Pollard from Canberra to Mendoza is not straightforward, however, and it is likely he will arrive less than 24 hours before the game.

It is the first national squad selection for Pollard, who was a sought-after talent as a teenager after playing junior rep footy in both rugby and rugby league. Big-name NRL coaches such as Wayne Bennett and Craig Bellamy attempted to sign Pollard, but the Sydney-raised youngster elected to sign with the Brumbies.

Former Brumbies coach Dan McKellar, who is now the full-time Wallabies forwards coach, told the Herald earlier this year that he didn’t think Pollard would choose rugby when he initially began trying to recruit him. Part of the pitch was that Pollard would have to spend two years learning the dark arts of the rugby scrum, and other set-pieces.

“He is a very good footballer, he’d be a very good league back-rower, there’s no doubting that,” McKellar said. “He has speed and athleticism and skill-set, and he’s tough. But learning the dark arts of scrum, lineout and maul take time.

“We made it really clear from the start that an 18-year-old … that he was going to need a couple of years development, and get his set-piece to the level it needs to be at.”

Pollard was again preferred ahead of 15-Test hooker Jordan Uelese, who played for the Wallabies at the 2019 Rugby World Cup and featured in six Tests across 2020 and 2021, but hasn’t been used since by Dave Rennie. Alex Mafi made a Wallabies squad last year but is still on the comeback trail from neck surgery in March.

Tolu Latu is also now available for selection, having signed with the Waratahs, and the 19-Test hooker played for Rennie on the Spring Tour last year. But he has not played in months since leaving France and was not considered.