CTE, a neurodegenerative disease caused by repeated head trauma, is perhaps best known in the sporting world for the class action in the US which saw the NFL pay approximately $US 500 million in compensation to affected players. 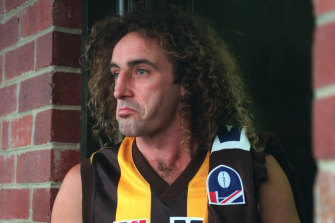 “I’m a pretty happy [-go-] lucky bloke, but at times I get frustrated on things,” Platten said.

“It’s not an everyday concern but certainly when someone says something to me, a family member, and then five minutes later I forgot to do it or whatever, they say, ‘John, I just told you to do that’. Look, it is scary.”

However, Platten didn’t place any of the blame for his present-day concerns on the Hawthorn doctors during his playing days.

“You just go out there and times there when you play the game you know that you got whacked because you see a few stars and someone comes out to you and they say, ‘How are you going?’, I said, ‘Yep, I think I’ve been whacked but I’m not sure’,” the four-time premiership Hawk said.

“Then you come off the ground and you start vomiting and then you start to realise I have been hit and I have got a concussion, what do I do? Do I go to hospital or do I go home?

“All these little things come back to you now thinking that maybe I should have had two or three weeks off.”

Platten has a check-up every year and said the silver lining of Farmer’s diagnosis is that it will increase public awareness for CTE.