Port Adelaide clinically exposed the massive gulf between where many felt St Kilda were trending towards at the beginning of the year, and where they actually sit in the AFL’s pecking order with an Anzac Day wipeout, 14.9 (93) to 5.9 (39).

The Power, securing their third successive victory to hold on to third spot on the ladder, were composed and prolific in defence, played absolute keepaway in the middle of the park and looked dangerous every time they launched into attack, particularly in the first three quarters. 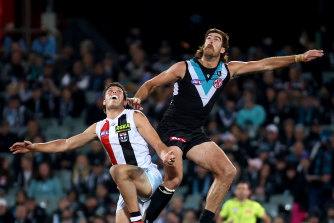 Conversely, the Saints looked under the pump in defence, completely incapable of corralling Port’s runners through the middle and were haphazard with their forward entries, giving their tall targets no chance.

Jack Higgins’ magnificent left-foot curler from the members pocket of the Cathedral End had St Kilda up and about early but they were forced to wait until the cusp of time-on in the second stanza to register their next goal, through Brad Hill.

In between those rare moments of lustre for the Saints, the mesmerising Port machine went into overdrive.

Half-back Karl Amon racked up 34 possessions, including 26 in the first half – his previous career-high was 26 a week ago against Carlton – best-on-ground Ollie Wines, Travis Boak and Dan Houston did as they pleased through the middle, Tom Jonas, Ryan Burton and Aliir Aliir likewise in defence.

Steven Motlop ripped any semblance of St Kilda ascendancy with three first-half goals, Orazio Fantasia chimed in with three of his own, and Mitch Georgiades’ star continues to ascend with two second-quarter goals, the first coming from a powerful pack grab.

Georgiades’ second six-pointer came courtesy of a 50-metre penalty after Seb Ross, inexplicably, lost concentration when he entered – and slipped over in – the protected zone.
It wasn’t the only St Kilda blue. 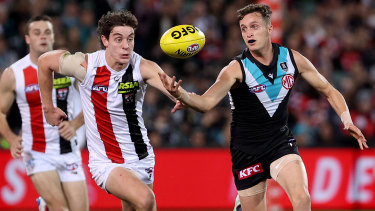 The mercurial Orazio Fantasia seems to have the ball on a string.Credit:Getty Images

The normally sure-handed Jake Carlisle spilled a sitter in the goal-square in the second period, while later in the quarter Dougal Howard soared several seconds too high above Charlie Dixon in a one-on-one contest, allowing Boak to mark easily out the back and goal.

Max King was unable to influence the contest, nor were Zak Jones, Ben Long, Dan Butler, Brad Hill and Carlisle. 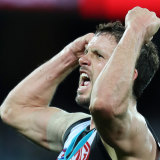 In fact by half-time, 11 Port players had more than 10 touches … Ross and Jack Steele were the only Saints in that category, the visitors seemingly unwilling or incapable of fashioning the type of all-in response required after being crushed by Richmond 10 days earlier.

Down by 34 points at half-time, it got tougher still for St Kilda, held scoreless for the first 25 minutes of the third term as the Power continued to flex their sizeable muscle.
The margin ballooned to 60 points in the fourth term as the Saints’ night of woe worsened when Hill retreated to the bench, his ankle iced and his jacket on.

QUALITY VERSUS QUANTITY
The pure numbers in the opening term showcased the difference in approach, execution and class between the two teams.

Marshalling the defence with patience, Amon, Houston and Jonas combined for 36 first-term disposals, 19 marks and 12 rebound-50s as the Saints’ high-volume, low-percentage bombing method played perfectly into the Power defence’s hands.

Port, dominant in every other category, rectified the territory battle emphatically from quarter-time onwards as the rattled Saints subsequently retreated into their shell.

MCKENZIE HITS OLLIE HIGH
St Kilda’s rough old night continued when defender Daniel McKenzie had his number taken early in the third term.
McKenzie charged hard at Wines in the centre-square with a bump that left Port’s midfield bull momentarily groggy following the clash of heads.
Wines shook off the hit and continued to pummel the Saints at the contest, maintaining the All-Australian pace he has set in 2021, the best campaign of his already impressive career.

Tags: Adelaide, expose, Port, Saint, THE
You may also like
Latest Posts