Xavier Duursma, Zak Butters and Connor Rozee will all return from injury for Port Adelaide against Collingwood on Friday night, in a move the Power hope will supercharge their premiership push.

The star trio selected in the 2018 draft will return to the line up, according to coach Ken Hinkley, with Duursma (ankle) having not played since round four. Butters (knee) has missed two weeks after missing months before that while Rozee (knee) missed last week’s win over St Kilda. 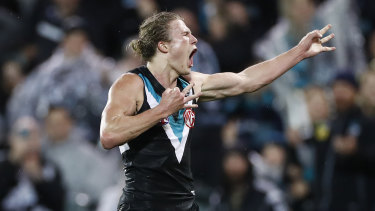 Duursma has not played since round 4. Credit:Getty Images

“It’s quite remarkable because the three boys have had an impact in our club from the moment they walked in,” Hinkley said.

“We certainly think it gives us a boost in our ability, but also in our enthusiasm and our willingness to play the game in an exciting brand.

“I think there’s always some risk around particularly Zak and Xavier … we know how long it can take the absolute cream of the crop to get going when they’ve had an extended break.

“But the season is coming closer to the end and we need to get them back in our side and playing again at AFL level.”

The Power sit fourth on the ladder having shown some patchy form through the middle of the season, with GWS, Adelaide, Carlton and Western Bulldogs left to play after the Collingwood clash.

Meanwhile Carlton coach David Teague has said Charlie Curnow needs more time in the VFL and won’t play AFL against North Melbourne this weekend, but he did indicate Patrick Cripps was likely to return from injury.