Melbourne coach Simon Goodwin has become better at not sweating the small stuff on the road to becoming a premiership coach.

Even after three losses in a row, a punch-up between teammates, the dredging up of internal doubts about his coaching from two years ago, and the absence of the skipper Max Gawn, Goodwin kept the faith.

He doubled down on the team-first values that led them to a flag and welcomed one of the pugilists, All-Australian full back Steven May, back to the team. 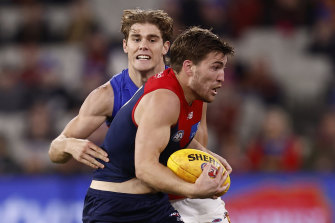 Jack Viney was excellent in the Dees’ win.Credit:Getty Images

And then, after a 64-point win over a flag challenger, he referred to a phrase author Richard Carlson used in his best-selling book ‘Don’t sweat the small stuff’ when asked how pleased he was about the response to the doubters and critics.

“Praise and blame is all the same in our world,” Goodwin said.

“We are really clear on our method, really clear on how we want to play, and whether we lost three in a row or lost 10 in a row doesn’t really matter. We just go back to what works for us.”

The coach said it was difficult at times to keep balanced, but the Demons have been consistent in doing so for the past two years and their behaviours are now embedded. 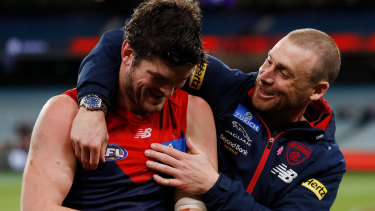 “Lots of things can drift into your footy club so [praise and blame] are both equally challenging but equally important. If you give people too much praise it can be toxic in terms of giving to the team, so we’re really conscious in celebrating the team acts and celebrating role inside our footy club,” Goodwin said.

The coach praised his leaders for their response, singling out Jack Viney for a special mention after he put in a best-on-ground performance in his first game as captain for the season, in the absence of Max Gawn.

“He has been brutal around the contest all year, and he’s been in fantastic form all year, and I think tonight, when the spotlight was on our footy club and he was skippering for the first time for the year, he stood up massively for our club,” Goodwin said.

May returned from suspension after he was involved in an altercation with teammate Jake Melksham outside a Prahran restaurant three weeks ago, and his influence on the team’s performance was obvious.

The coach said it was clear May helped fellow defenders Jake Lever and Harrison Petty perform their roles, with the incident a lesson for the veteran.

“We haven’t learned anything different about Steven, but we continue to evolve Steven as a person and he has come a long way in the last three or four years…he’s made a mistake, he’s owned up to it, and he put the things in place that he needs to but, first and foremost, we need him playing his best footy.”

Disappointed Lions coach Chris Fagan said he hoped his midfield would be stung into a better showing next week after they were thrashed in the contest.

He said the uncharacteristic performance was hard to explain and they were lucky the margin was not bigger in the end.

“That’s as bad as we have played in a long, long time,” Fagan said.

Midfielder Jarryd Lyons will have a scan to determine the extent of rib damage caused when he copped a knee to chest from Melbourne’s Bayley Fritsch, with the coach suggesting it was cartilage damage rather than broken ribs.

Fagan was hopeful a shoulder issue for Harris Andrews was ‘a stinger’ and was certain captain Dayne Zorko would return alongside Zac Bailey, who missed the match with COVID-19.