Max Gawn is so honest he admitted before the game that he had replayed the first bounce over and over in his head.

His comments raised eyebrows as they are rarely made in the lead-up, more often something a player says six months after the match while reflecting on what went wrong.

But that is Gawn, a character who defies convention by being himself, the hipster beard masking the competitive beast that has helped drive his team to the drought-breaking flag, which looked in jeopardy midway through the third quarter. 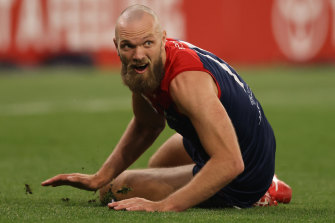 Genuine: Max Gawn in action during the 2021 AFL grand final against the Bulldogs. Credit:Getty Images

His words were consistent with the message the late Jim Stynes, who wore the same No.11 as Gawn, had delivered to the young buck from Ormond to be himself when the beanpole was battling to find himself in a football environment that didn’t seem a natural fit.

And as Gawn proved once again, such ridiculous notions of what decides games of football don’t matter one bit if the preparation, attitude, plan and execution happen in a selfless manner.

That opening bounce won’t be one for the pool room as the ball landed without either Gawn or his opponent, Stefan Martin, a man he made his debut alongside in round 11, 2011 when both played for the Demons.

In fact the spiritual leader of the group, the man who helped the Demons galvanise after a round of golf during the pre-season where they resolved to put the team above individual glory, did not have his best game.

But he played his role to perfection, sacrificing his need to be the hero by handing over the centre square to his heir apparent Luke Jackson when the Demons trailed by 19 points in the third quarter.

Gawn just created space at the top of the forward line to allow his midfielders the space to run and kick the ball over his head.

This was the man who knew what being selfless was all about, having enduring two knee reconstructions as he played close to 50 VFL games and was dropped a dozen times before his breakout match for the Demons down in Geelong in round 12, 2015. 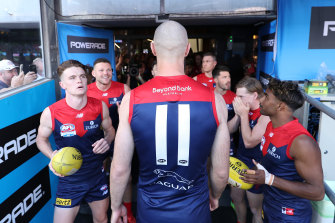 Max Gawn leads the Dees onto the field. Credit:Getty Images

That experience gave him a deep reservoir of knowledge to draw upon when he told his more talented, precocious teammates that they would not win a flag unless they committed to the team.

Not that Gawn was missing. He had won them the minor premiership with a goal after the siren in the final round and led them to the peak.

In the first half he was unlucky to not be awarded a goal when his shot appeared to go inside the post. He was uncharacteristically edgy but he was entitled to be with a premiership to be won before he returned to be with his wife Jess for the birth of their first baby.

He was good enough, crumbing the ball if necessary and marking when the Demons needed him either behind the ball or inside 50, but he was emotional, waving his hands in frustration at times. At the long break he had 14 disposals with five marks.

The five-time All-Australian only had four touches in the second half as his team just piled on the goals, keeping them fresh to hold the premiership cup aloft for the Demons for the first time since 1964.

Even a man with tastes as refined as Gawn will find a spot for a photo of that moment of triumph inside his home. To hell with it, throw the picture up on the wall of his trendy wine bar for at least the next 12 months too.

Gawn deserves every piece of joy and satisfaction he garners from this achievement.

He was himself. He let others be themselves too. A captain for the ages. A premiership skipper forever.

Tags: a, cap, Gawn, Premiership:, skipper
You may also like
Latest Posts