Richmond midfielder Dion Prestia will have scans ahead of the Tigers’ clash with Collingwood after being subbed out of Friday night’s huge win over the Eagles at three-quarter time, when he reported Achilles and soleus muscle tightness.

The star midfielder has had a wretched run with injury since the start of 2020, playing 23 games in that time as he battled soft-tissue injuries. 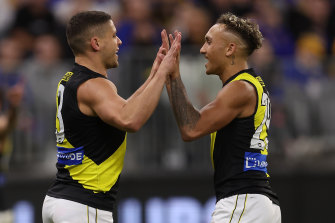 Dion Prestia kicked a goal against the Eagles before being subbed off.Credit:Getty Images

Tigers coach Damien Hardwick said the decision to sub him out was a cautious one as the 29-year-old played the third quarter despite reporting the soreness at half-time.

“It’s a really challenging one for us because he is so important to how we play, but we could not take the risk with him getting injured,” Hardwick said.

Prestia missed rounds two and three with a minor hamstring issue and is desperate to keep playing. Hardwick was noncommittal when asked about the triple premiership player’s availability in round eight.

“It’s hard to tell. We’ll obviously get scans and work our way through it,” Hardwick said.

Dustin Martin is expected to return against Collingwood, although Hardwick said no decision had been made. However, he conceded the champion Tiger, who took a break from the game after round one for personal reasons, was keen to play.

Meanwhile, the Magpies are confident Jordan De Goey and Will Hoskin-Elliott will be available to play against Gold Coast on Sunday after both attended the captain’s run on Saturday morning ahead of the match at the MCG.

The pair missed Friday’s session with a bout of gastro, but the club was confident it was a short-term issue.

Melbourne have lost another player ahead of their clash against Hawthorn at the MCG on Saturday evening with Alex Neal-Bullen joining Luke Jackson, Kysaiah Pickett and Tom Sparrow on the sidelines after he was diagnosed with COVID-19.