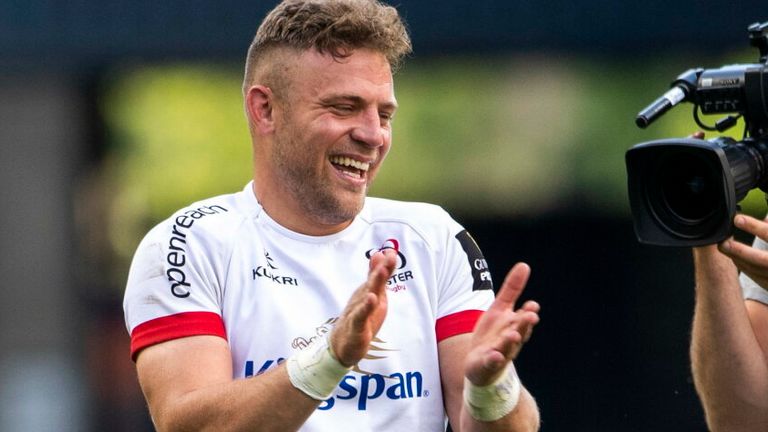 Ian Madigan repeated his Murrayfield heroics as he nailed another last-minute kick to hand Ulster a dramatic victory over Edinburgh.

The fly-half broke the Scottish side’s hearts back in August as he booted his side into last year’s PRO14 final with a nerveless stoppage-time effort.

And he was required to do it all over again as Dan McFarland’s men climbed off the bottom of the Rainbow Cup table after a 10-try thriller.

Edinburgh were ahead early thanks to Duhan Van Der Merwe’s 32nd and final try for Edinburgh before the British and Irish Lion joins Worcester next season.

Blair Kinghorn added another for the capital club but Ulster stormed back with touchdowns from James Hume, Iain Henderson, Stuart McCloskey, Adam McBurney – who will join Edinburgh in a few weeks’ time – and Rob Lyttle.

However, Edinburgh came back themselves and thought they had won it when Eroni Sau’s controversial late try was allowed to stand by referee Ben Whitehouse after scores from Pierre Schoeman and Cammy Hutchison had fired the hosts back into contention.

But when Kinghorn missed a chance to win it with his conversion, the Irishmen raced up field to win a penalty – with Madigan showing the Scotland international how it was done.

Makazole Mapimpi shone on his Sharks return as they kept their Rainbow Cup final hopes alive with a bonus-point victory at Ellis Park.

Back in the starting line-up after a stint in Japan, Mapimpi crossed for the Sharks’ fourth try early in the second half to set up a South African decider with the Bulls in Durban next Saturday.

The Sharks led 19-14 at half-time thanks to two tries from Kerron van Vuuren, with Phepsi Buthelezi also dotting down.

Andre Warner and Ruben Schoeman scored first-half tries for the Lions and they responded to Mapimpi’s try with efforts from Willem Leon Massyn and Pieter Botha to boost their comeback hopes.

However, Sharks full-back Anthony Volmink made sure of victory with a 71st-minute try. They trail the Bulls by four points heading into next weekend’s final-round match.