Rugby league heartland. Where kids train on concrete, posts are made of PVC pipe, and State of Origin – calypso-style – is king.

Some things in this game, even with an island soundtrack, never change.

“The Reds are on a six-series winning streak, it’s the Kingston dynasty,” Roy Calvert, assistant coach to the national side and one of the Jamaican game’s founding fathers, laughs.

“Just like Queensland. The Blues actually would have won the series this year and ended their run. But we added an extra game to give our guys more game-time ahead of the Cup, so of course the Reds got up again.”

Jamaica’s Reggae Warriors have been trounced by a combined 116-8 margin in their first two World Cup games, and are expected to go down in similar fashion to Lebanon on Sunday (11pm AEDT).

But four of those points in the Jamaicans’ keeping are responsible for one of the tournament’s most enduring moments to date: Ben Jones-Bishop, a 34-year-old, two-time Super League champion, playing his 300th career game, falling onto a grubbered ball against New Zealand for a historic try.

Cue pandemonium among his teammates, some who had paid thousands from their own pockets over the years on trips to Canada and the US for World Cup qualifiers.

“It wasn’t about the try, it was the celebration,” Calvert says.

“If we had been allowed, the staff would have joined too. It was about understanding the hard work and sacrifice that had gone into that moment. 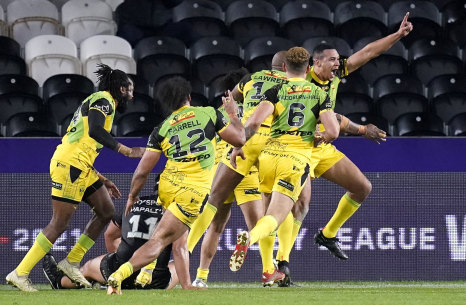 “And understanding that this is the tip of the iceberg. It’s not about us. It’s the legacy we want to leave behind, what this sport looks like in 15-20 years from now.

“We want to be telling our grandkids these stories, while they’re playing the sport.”

Which brings us back to Jamaican Origin. Officially, Parish of Residence or ‘POR’. For the 1000-odd registered players across the island, this is the real deal.

Kingston and St Andrew wear red but seemingly play the part of NSW given its players are drawn from the capital – home to around almost half of Jamaica’s 3 million residents. 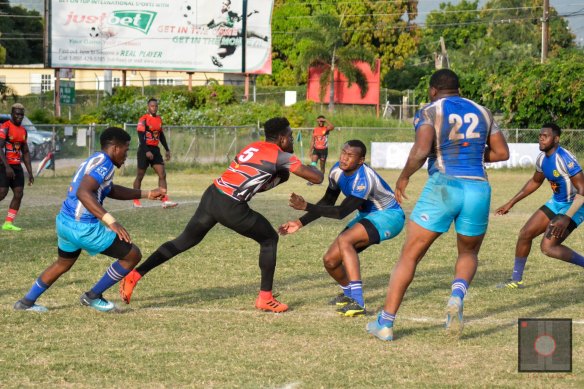 The Blues hail from the rest of the island.

“And there’s proper hatred to it, man,” Calvert laughs. “Proper hatred. We’ll get crowds of around 2000 people, and they’re split, reds won’t sit with blues.

“I coach [domestic champions] the Duhaney Park Sharks and I’ve got guys who play for me and then reds or the blues against each other. You’d never believe they’re teammates. It’s very cool, it gets very physical and personal.

“We’re the only country in the Caribbean who plays rugby league so to get a game, that means going to the US, going to Canada or all the way to Europe. 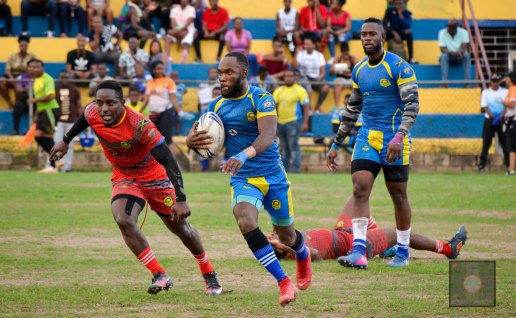 Blues on the ball in Jamaica’s own State of Origin-style series.Credit:Hurricanes Rugby League Jamaica

“POR brings our elite players together and that’s what our domestic players aim for every year, it’s effectively a trial for the national team now.”

The Reggae Warriors really only exist thanks to folk like coach Romeo Monteith and right-hand man Calvert. And that name? “You know what, we just decided, ‘why not?’ on that one.”

High school friends and teammates, the pair were inaugural board members of Rugby League Jamaica when it was founded in 2004 and “our wives are still cussing us for spending every Saturday at the footy” almost 20 years later.

Their development efforts on the home front are why PE teacher turned back-rower Chevaughn Bailey found himself wiping tears away in England’s north a few weeks ago.

“We want to be telling our grandkids these stories, while they’re playing the sport.”

“It’s like I’m a different person when I wear the black, green and gold,” Bailey says.

“Playing for Jamaica, it’s special and very emotional. I never thought I’d ever represent my country. I had tears during the national anthem.”

Bailey is one of six island-based players in the Reggae Warriors squad. There still is no designated rugby league pitch in Jamaica, though that’s expected to change after the World Cup. Commitment to the cause is no easy thing when poverty abounds across the island.

“Something simple like a pair of boots, isn’t that simple,” Calvert says.

“At home we have kids who will train on concrete, just for the love of the game.

“Players dip into their own pockets to prepare the field, mark up the field, even posts. Not everyone has them, so they’ll be buying PVC pipe and strapping it onto the football posts. This team carries that with them.”

For heritage players like 300-game Super League veteran Michael Lawrence, he has carried Jamaica with him all his life.

The 32-year-old prop has ramped up inclusion and diversity initiatives in the English game as part of the Black Lives Matter movement, hopeful Jamaica’s World Cup foray can revive rugby league in black communities. 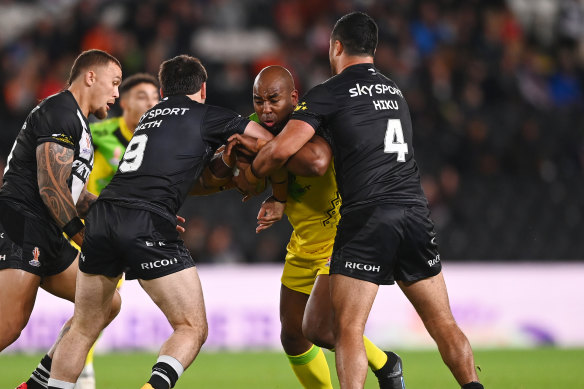 Michael Lawrence takes on the world No.1 ranked Kiwi pack.Credit:Getty

It’s been too long since the days of Des Drumond, Ellery Hanley, Martin Offiah and Jason Robinson.

“Over the last 20 years we’ve noticed the number of black players playing rugby league has dropped away massively,” Lawrence says.

“This is a massive opportunity, we want the legacy to last both in Jamaica and here in England.

“For me personally, I’ve done a lot in my career but when I told my dad that I was representing Jamaica, I’d never seen him that proud in my life.

“He’s not an emotional guy and to be honest that’s the first time he’s really expressed that and said, ‘I’m so proud of you’. That meant a lot to me and my family, and that’s the kind of effect rugby league can have.”

Only of course, if you give it a chance. Calvert is a rugby league tragic and to play in his team, studying NRL games is compulsory.

The coach dives even deeper and consumes NRL talk shows and media more than most Australia fans.

So he hears the comments about his Jamaican side and World Cup blowouts, the suggestion lopsided games do more harm than good.

“And it’s ridiculous. You have to start from somewhere. You talk about rugby union, man I hate talking about union.

“But not that long ago, the All Blacks put 145 on Japan [in the 1995 Rugby World Cup]. Now Japan has hosted a World Cup and beaten South Africa.

“You can’t have a World Cup played by four or five nations. If you want a truly international game, it takes time and patience. As they say in State of Origin, you have to ‘pick and stick’.”