Check back for further updates.

‘He’ll turn it around’: Ratten backs King to fix goal-kicking

St Kilda coach Brett Ratten says Max King is putting in the work on his goal-kicking, and he is confident the results will follow.

The 22-year-old key forward’s inaccuracy from set shots was put on display on Friday night as he kicked 0.5 in what was a must-win game for the club. 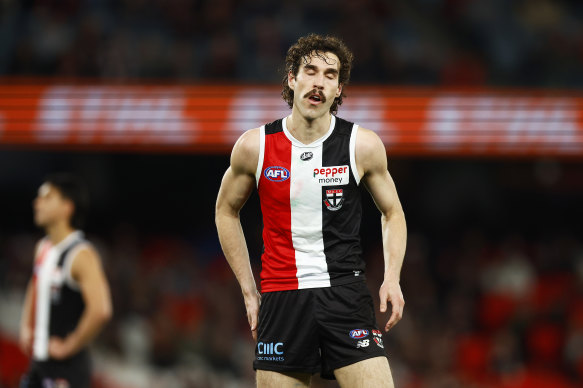 Max King reacts after missing a shot against the Lions on Friday night.Credit:AFL Photos

King has kicked 47 goals and 46 behinds in 21 games this season.

Ratten said King was constantly working on his kicking.

“He’s doing a power of work and what I do know is I want Max King in my corner,” Ratten said.

“He’ll be at our footy club for 10 years and when we look back, we’ll be saying what a great player he is and what he’s done.

“Tonight he had a night where it didn’t work for him. He did everything right bar the finish.

“He’s 22 years of age, we love what he brings to the footy club, and he’s developing, but we know he’s doing the work.

“Sometimes you don’t get the reward all the time, but he’ll keep doing that and, you watch, he’ll turn it around.”

Ratten said he didn’t think the key forward needed help from outside the club as he feels the Saints’ coaching and support staff can help King deal with his issues.

He also said it was more complex than just attributing King’s goal-kicking to not handling pressure.

“Goal-kicking has got so many elements to it,” Ratten said.

“It’s the technical aspect, the mental aspect, the fatigue – people score from different parts of the ground when the ball is on the right side versus the left [for example].

“There’s different elements to it, but I wouldn’t say it’s high pressure.

“I want to go to war with Max because he delivers, and he will deliver.”

The Saints will enter their final round clash with the Sydney Swans needing a win and then several other results to go their way to have any chance of finishing eighth.

Ratten said he wanted his players to finish on a win after an inconsistent end to the season.

“We have to finish the year strong,” Ratten said.

Brisbane Lions coach Chris Fagan can see a heartbreak scenario in the making if the AFL doesn’t tweak its “stand rule” ahead of the upcoming finals series.

In the third term of his club’s 15-point win over St Kilda on Friday night, Saints forward Jack Higgins was running into goal and shaped like he was about to play on before reverting to his kick for goal, a move that made Lions captain Dayne Zorko flinch in response.

That led to the umpire calling a 50-metre penalty for moving on the mark allowing Higgins to trot in and kick a goal from pointblank range.

Fagan said he thought the “stand” rule had made a positive difference to games but he feared it could lead to unjust results if a small allowance wasn’t allowed for players to react.

“Do we want a grand final decided on a decision like that? Can you imagine?” Fagan said post-game.

“I can’t imagine that. My personal view is we should review that rule and that’s not a criticism of the way that it is. I think it’s been quite a good rule, but I think a player on the mark should be allowed one step the left or right as long as he doesn’t go any further than that. 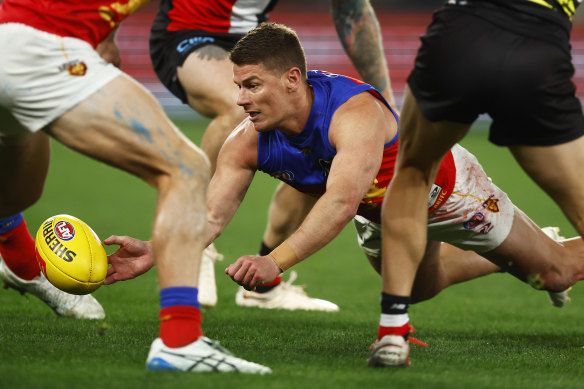 Dayne Zorko in action against the Saints on Friday night.Credit:AFL Photos

Fagan said he hoped it was talked about before the finals.

“It’s unnatural not to move when somebody does that and players play for it and good on them – that’s clever football,” Fagan said.

“But you shouldn’t get a 50m penalty for just moving slightly. Am I going to get in trouble for saying that? I hope not, but I think we should talk about it.”

Fagan also raised his concern about opposition taggers being allowed to block superstar Lachie Neale’s path to the football. 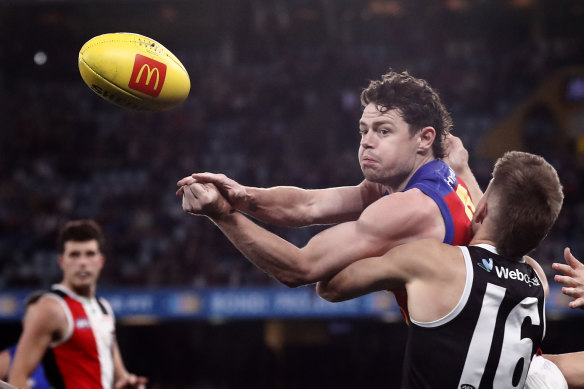 Lachie Neale gets a handballl away against St Kilda.Credit:Getty Images

Neale only had 16 possessions on Friday night with Saints tagger Marcus Windhager keeping a close watch on him.

“What I like about Lachie is that he never stopped having a crack and did a lot of selfless stuff around the stoppages that probably didn’t give him a stat but made us better,” Fagan said.

“It was interesting how he was tagged. That he was blocked off the ball and various other things. He gets pretty rough treatment I reckon.

“I would like to have a look at the tape and see what it looks like but players shouldn’t get blocked getting to the ball like he does.

“I want all ball players to get looked after, not just my blokes.”