‘Hopefully everyone can see I am a different person’: Reborn England star Kyle Sinckler keeps his head in a chaotic win as Wales feel the squeeze

All around him, others were losing their heads, but this time Kyle Sinckler did not. The pantomime villain of last year’s England defeat in Cardiff proved on Saturday how much he has changed.

The penultimate stage of what could eventually become a title-winning campaign for the national team was frantic, chaotic and contentious at Twickenham.

There was Joe Marler grabbing Alun Wyn Jones’ groin, prompting an angry post-match protest from the Welsh captain. There was a yellow card for Ellis Genge just moments after he had come on and there was Eddie Jones’ fierce condemnation of the referee for sending off Manu Tuilagi. 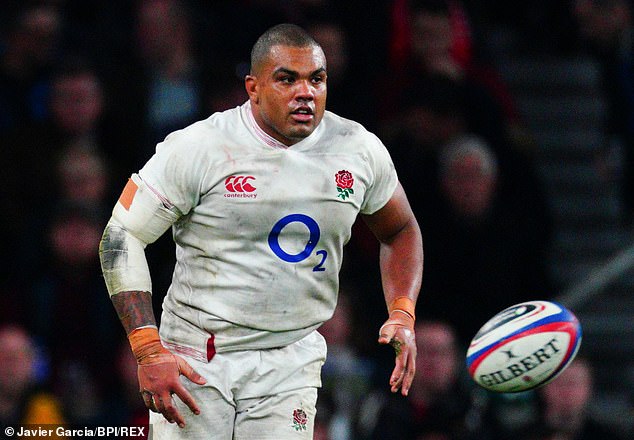 England appeared to be home and hosed when they led 33-16 with three minutes remaining, only for the visitors to claim two late converted tries when it was — in the words of the hosts’ head coach — ’13 versus 16′.

So, all in all, it was a contest which defied logic. It was a strange, fluctuating mess of a match but in the middle of it was a reformed, almost serene figure.

Sinckler did not become embroiled in the chaos. His composure did not desert him as it had at the Principality Stadium at the end of February, 2019. In that game he gave away two reckless penalties which turned the tide Wales’ way and was immediately taken off. This time, no search for a scapegoat would lead to his door.

It was fitting that the Harlequins tighthead should so emphatically demonstrate how much he has matured on the day he launched a foundation to help children from inner-city London fulfil their rugby ambitions. He has emerged as a role model and admitted his ordeal in Cardiff was a key step in that process. ‘I’m very, very thankful for what happened in Cardiff because without that, I’d probably have kept costing the team,’ said Sinckler. ‘At that time, my ego was bigger than this room. I really enjoyed being that villain — the bad boy of English rugby. I was very, very angry. I had to understand why I was angry and become a better person. 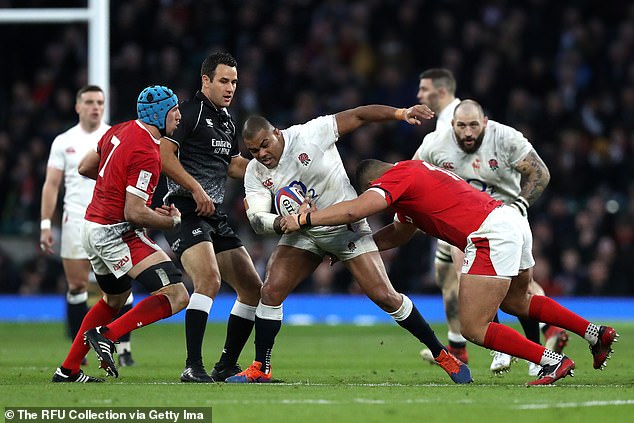 Sicnlker kept his head during a frantic, chaotic and contentious game at Twickenham

‘At the time, you feel like that’s what you have to do if you want to be a man. You feel like being the tough guy is grabbing guys and being in their face, saying certain things and wasting energy.

‘But that’s not actually being a man and being tough. A man just gets on with it and is in control of his emotions, gets on to his next job, is never flustered and is tough.

‘I’m very, very thankful for the experience I had this time last year. It was exactly what I needed. That gave me the catalyst to change because if I didn’t change I wouldn’t have played for England any more.

‘I cost the team a Grand Slam and I was in denial. I never took responsibility for what happened. I was saying “Life is hard. It wasn’t my fault. The referee doesn’t like me. In Cardiff you’re never going to get the rub of the green”. But when you strip it back, it was just ego.

‘It was ego trying to get in with Alun Wyn Jones — trying to be that bad boy, which cost the team. Now, hopefully, everyone can see I am a different person. I thank Gats (Warren Gatland, who called him an emotional timebomb) and I thank Alun Wyn Jones because I feel I have grown from it.’ 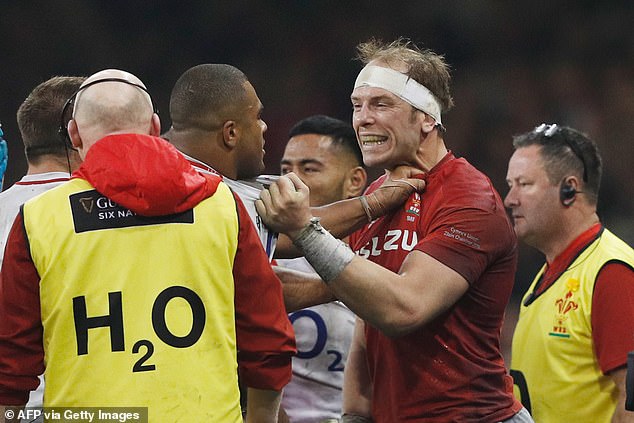 Sinckler was satisfied that he handled himself altogether differently on Saturday when Wales attempted to get under his skin again. He said: ‘The same situations were happening in terms of holding me down and someone stamping on me when I was getting up, or certain things said, but it had no effect.

‘Now I am so dialled-in on what I need to do for the team to be successful and that’s a big, big part of why I’ve had to work so hard, because my ego used to rule me.

‘I always had to get one up on people or confront people but now if you target me, that is wasting energy.’

Sinckler spoke about how much he owes to Eddie Jones for not losing patience with him.

‘I have to give massive appreciation to Eddie for sticking with me, because most coaches would have got rid of me,’ said the 26-year-old. ‘Eddie has always stuck by me and protected me. He’s always put his arm around me and he gets the best out of me because he’s very, very real — he just says it how it is. I appreciate that raw honesty.’ 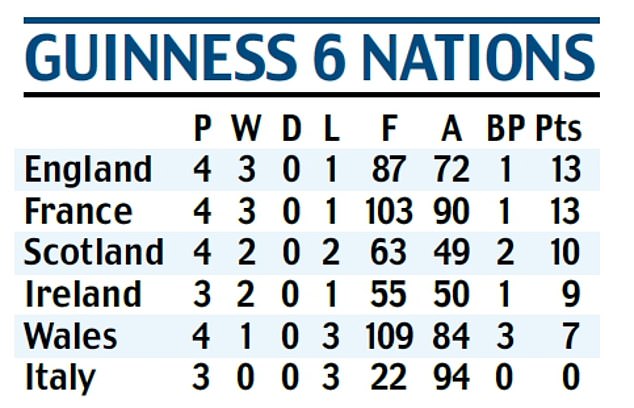 WHO WILL WIN TITLE?

England are odds-on favourites — a bonus-point win against Italy in their still-to-be rearranged match in Rome should seal the title.

France’s points difference is two worse than England’s so they would have to overturn that against Ireland, who could yet take the crown with bonus-point wins against France and Italy.

England were powerful and potent in building up a commanding lead against Wales. Ben Youngs maintained his personal renaissance, George Ford once again pulled the strings in attack with vision and precision and up front there were quality contributions from several forwards — notably Maro Itoje, Courtney Lawes and the returning Mark Wilson. But the home side unravelled in the closing stages. If the game had gone on a few more minutes, they may have lost it, rather than holding on to claim the Triple Crown.

Wales would not go quietly and remarkable performances by Justin Tipuric — who claimed two tries, one of them a long-range classic — and Nick Tompkins left England desperately scrambling to protect their lead.

But it was a third successive defeat for Wayne Pivac’s regime.

Eddie Jones has set his players the task of becoming the greatest team in the history of the sport and they have much to do to come close to such a lofty target.

But Sinckler has proved how much can be achieved in a relatively short space of time. His transformation can inspire his team, who will hope that their trip to Rome can be re-scheduled for October, as the championship trophy will be there for the taking.