Florence: Wallabies coach Dave Rennie has defended some controversial late selection calls in Australia’s one-point loss to France and said he disagreed with a key call by referee Jaco Peyper in the dying minutes of the tense Test in Paris.

As the Wallabies turn their attention to the Test against Italy in Florence this weekend, there is an underlying feeling of what might have been among the Australian players, who know they missed a golden chance to beat the team many regard as the favourite for next year’s World Cup.

Halfback Nic White summed up the side’s frustration after a 30-29 loss in Paris.

“It’s quiet [in the change rooms] because it hurts losing like that,” White told the Herald. “We pushed them right to the edge and had them there for a bit. There’s positives there, it’s just hard to see right now.”

The Wallabies’ grand dreams of a spring tour grand slam were all but extinguished when Damian Penaud beat defenders Tom Wright and Jock Campbell to score in the 76th minute.

Hodge’s restart was a shocker – the kick didn’t get above knee height – but the Wallabies regained possession a few rucks later. Australia then went ahead 29-25, courtesy of a Hodge penalty, before falling short by a point.

“I think it was a poor substitution taking Bernard Foley off,” Mitchell said after the game.

“You’ve got seven minutes to play and you take your key decision-maker off? [It is] not so much [about] Reece Hodge – I’d get him on somewhere – but at 10 was a poor decision.

“[Foley is] the key communicator, the driver, the steerer of the ship. Having someone who’s not a [specialist] 10 come on to play 10 in the most crucial moment of the game?” 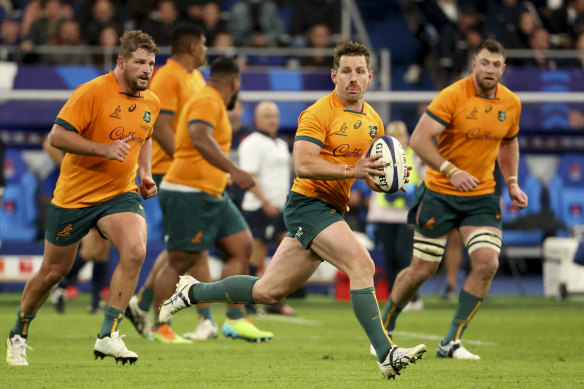 Bernard Foley was hooked with under 10 minutes to go.Credit:Getty

Rennie explained to the Herald why he went that way in the final minutes with the game on the line.

Asked if he had any regrets, Rennie said: “No. We brought Hodgey on because we were in front. He’s a bigger defensive body and has a big boot. That was the thinking around 10.”

The other decision questioned by Wallabies fans was the call to bring Michael Hooper off in the 71st minute. Hooper is renowned for his ability to play 80-minute matches. When Rennie substituted him in Paris, it was the first time since August 2018 he’d not gone the full 80.

“With Hoops, he was just gassed. He looked gassed after about 50 minutes,” said Rennie of his back-rower who’d only played one Test prior since early August. “There was a lot of kicking and as you know with him, when there’s kicks, he’s going full throttle. They kicked the ball 36 times. He got a second wind for a while.

“We wanted to get [reserve back-rower] Pete Samu on. We needed Jed [Holloway] on from a lineout perspective with Will [Skelton] on the field and defensively Bobby [Valetini] is a bigger body. That’s why we took Hoops off.”

Rennie was also quizzed about Folau Fainga’a lineout work. The hooker’s first throw was picked off by France and his last, with two minutes remaining, was deemed not straight.

It was a textbook coach-killer and a golden opportunity that went begging for the Wallabies.

However, Rennie said he felt Peyper got the call wrong. In his view, the ball was thrown in straight enough.

“I don’t agree with the last call. It was on the inside shoulder,” Rennie said. “It certainly wasn’t consistent with other decisions made in the game. The first one he threw short. We picked off a couple of their lineouts too. You’ve got two competitive sides going at it.

“It is what it is. [Lineouts] is a strong part of the game and an important part of it. It would have been good to get a little bit more territory in the second half so we could launch from up there.”

Watch all the action from the Wallabies’ Spring Tour with every match streaming ad-free, live and on demand on Stan Sport.