AFLW players have nearly doubled their pay in a one-year deal with the AFL that could be announced as soon as Thursday afternoon.

Under the terms of the deal – which the AFLW players will vote on and are expected to endorse at 1pm on Thursday – the AFL’s women players will receive a minimum of about $39,000 and a top tier (tier 1) of $71,000 in a 10-game home-and-away season. 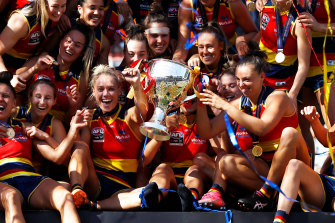 A one-year pay deal for AFLW players could be announced as soon as Thursday afternoon.Credit:AFL Photos

These payments represent an increase of more than 90 per cent for each of the tiers. The tier-one players, who are the competition’s stars, consist of just two players per club.

The one-year deal was forced upon the AFL because the league and the AFLW players could not agree on the length of season after the upcoming season, which has been brought forward to August.

The players wanted to see a progression to a longer home-and-away season, as the competition expands to 18 clubs, but the AFL did not want to have more than 10 games locked in for the subsequent two seasons.

There will be four weeks of finals in this upcoming season, rather than just three weeks of finals, with the finals expanded from a top six to a top eight – in the line with the fact that there will be 18 teams for the first time, with Hawthorn and Essendon entering the AFLW.

Sources familiar with the negotiations between the AFL and the AFL Players’ Association said the AFL’s hand was forced because the league had already announced the dates of the next season and had little choice but to give up bigger pay increases than what had previously been on offer, which were tier-1 payments of $67,000 down to tier 4 getting $37,000.