Richmond are firming as Tim Taranto’s new AFL home, with Greater Western Sydney conceding they cannot match a “monster deal” from the Tigers.

The Giants on Saturday night conceded they were all but certain to lose Taranto, despite football director Jimmy Bartel declaring earlier in the day that he hoped the tough midfielder would remain.

Giants insiders confirmed the Tigers and Collingwood had offered Taranto a “monster deal”, with industry figures suggesting the Tigers had offered a seven-year deal worth about $5 million. 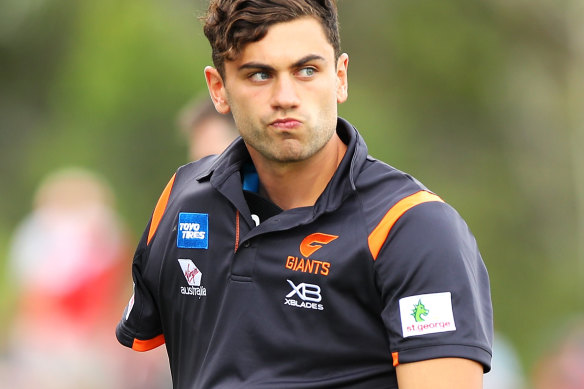 Tim Taranto will be sent for shoulder surgery this week.Credit:Getty Images

Taranto appears likely to nominate the Tigers as his preferred destination.

The Tigers know they need greater midfield depth and Taranto is seen as a man who can help usher in a new era that is not so dependent on Dion Prestia, Dustin Martin and triple premiership skipper Trent Cotchin, who has yet to confirm that he will play on next year.

The Giants will ask for at least the Tigers’ first-round draft pick as part of a trade for the former Sandringham Dragons product who was taken with the second pick of the 2016 national draft.

“Personally, I have never spoken to him but if he wants to come here, we would love to have him,” Vlastuin said.

“We are not going to mould around him but, at the same time, we don’t expect him to change if he does come to us, if that makes sense. He is a very handy player and he is still only 23.“

Taranto has played 114 games for the Giants and has averaged 23.4 disposals per game throughout his career.

The Giants have major salary-cap issues and appear set to lose several players, ahead of new coach Adam Kingsley joining the club.

Having finished 16th with only six wins this season, the Giants are fighting to retain Jacob Hopper, Bobby Hill and Tanner Bruhn.

As reported by The Age, the out-of-contract Bruhn, a midfielder, has spoken to Alastair Clarkson as North Melbourne and their new coach step up their search for talent to add to their list. Clarkson has been sounding out several potential recruits, including St Kilda’s Ben Long and West Coast’s Junior Rioli, as he looks to balance the list with the right mixture of emerging talent and those with leadership experience.

Bruhn is likely to return to Victoria just two years after the Giants used pick 12 — their first pick in the 2020 national draft — to select him.