St Helens: The Sydney Roosters have completed the NRL-World Club Championship double for the second successive year after edging out St Helens 20-12 on Sunday morning AEDT.

In a pulsating, bruising contest, the Roosters were forced to dig deep defensively in the second half to hold off the Super League champions before a late Luke Keary breakaway try sealed the win. 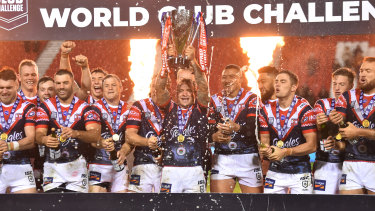 After the ball was spread from right to left, Daniel Tupou did superbly well to pick up a Keary pass from his bootlaces and cross the line.

Debutant Kyle Flanagan's kick clipped the upright to keep the hosts in front before Joseph Manu scored the Roosters' second try after a break from James Tedesco that freed Mitch Aubusson.

After the experienced back-rower was hauled down 10 metres from the line, a quick-play-the-ball found Manu who darted over for a four-pointer. 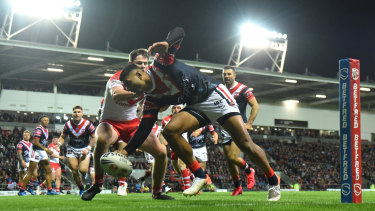 Flanagan missed his second kick of the night with the Roosters leading 8-6 at half-time.

The hosts started strong after the restart but were unable to turn possession into points as the Roosters defended their line desperately.

Skipper Jake Friend was inspirational for his team, making 49 tackles as the St Helens threw everything at Trent Robinson's side for a 15-minute spell. 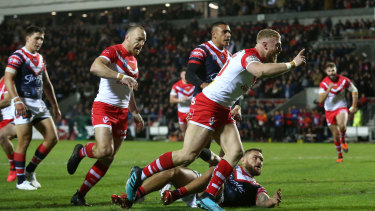 Buoyed by that defensive effort, the Roosters scored their third try of the night with their first real attack in the second half with Manu going over after a slick move.

At 12-6, Sio Siua Taukeiaho picked off a short pass and raced forward to release Keary who raced away to score a try.

Walmsley scored a deserved late consolation try for Saints but the Roosters closed the game out to take out the win. 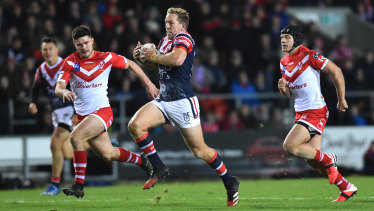 Mitchell Aubusson on the charge in for the visitors.Credit:Getty

"This is awesome, we are chasing a bit of history, this is really special for us," man of the match Keary said.

"It wasn't given to us we were on the back foot for the whole second half, but we held on with the skin of our teeth.

"This is to finish off our 2019 [and] it will give a lot of confidence going back to Australia."

The Roosters have some injury concerns from the match with Angus Crichton leaving the field with a concussion and Nat Butcher suffering a knee inury late on.