The Roosters have sworn off alcohol until their premiership campaign is over in a bid to continue their winning streak all the way to the grand final.

It’s a tactic that has paid dividends in the past, most notably before back-to-back premierships in 2018-19. The players have no qualms about swapping lagers for lattes, believing it’s a sacrifice that could give them an edge during the big season-ending matches. Other tweaks include some players reducing time spent on social media and steering away from junk food.

“It’s been going on for about a month now,” Roosters hooker Sam Verrills said.

“Everyone has different sacrifices, but it’s mainly getting off the drink and being more connected as a team, as a unit. Things like diet and social media are the main things.

“We are going out for lunches and dinners, being more connected as a playing group. We’re a very tight crew here and this helps us get tighter. Now it’s finals time, it’s a new season. We are so keen to play on Sunday.

“We break [the season] up into quarters, now it’s a new season and it’s week one. We want to go out firing against a big rival and good team.” 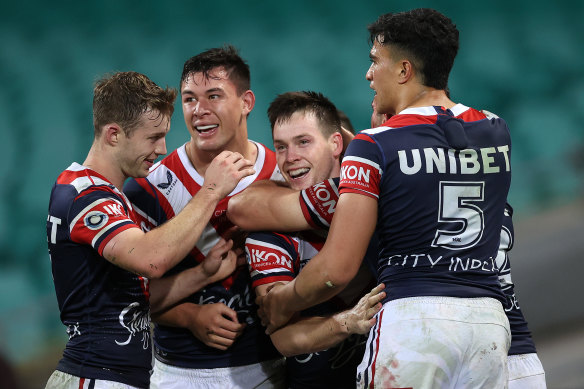 The Roosters are on a booze ban.Credit:Getty

Earlier this season, Latrell Mitchell revealed he had given up alcohol indefinitely in a bid to be at his best this season.

The Roosters are on an eight-game winning streak before their rematch against South Sydney in an elimination final at Allianz. A common denominator during the run has been the presence of “Coach Whisperer” Bradley Charles Stubbs, who rejoined the club after being part of previous premiership campaigns. Stubbs has enjoyed success with Michael Maguire, Eddie Jones, Graham Arnold and Michael Cheika and is now back at Bondi Junction.

“Bradley Charles Stubbs has done a lot for our club,” Verrills said. “He’s a funny dude, he’s good to have around the club. Obviously, he’s the ‘Coach Whisperer’. He’s a good character and we love having him here.

“I’ve had a few good conversations with him, he speaks from the heart. He’s doing wonders with the club. He’s putting his views across and we’ve won every game since he’s been here.”

Some players have sworn off social media altogether, but Verrills said he had just limited how much time he spends on it.

“You read a lot of articles, I try to stay off Facebook. It does clear your head a bit, especially for the back end of the year. I just don’t need it. So I got rid of it.”

Verrills, who will join the Gold Coast at the end of the Roosters’ campaign, wants to go out a winner.

“I’ve hopefully got four games left at this great club and I want to make it all count,” Verrills said.

“I’ve had a memorable time at the Roosters and I want to go out a grand final winner.”

A contender for Dally M Centre of the Year, Manu limped from the field with a calf injury late in Friday’s 26-16 win over the Rabbitohs and is set to spend at least two weeks in the casualty ward.

Oliver Gildart, Adam Keighran and Kevin Naiqama loomed as other replacement options but coach Trent Robinson has given the nod to Momirovski, who won the 2021 premiership with Penrith.

Damien Cook (COVID-19) and Campbell Graham (concussion) have been named to return for the Rabbitohs, while Victor Radley (concussion), Joseph Suaalii (shoulder) and Daniel Tupou (groin) are in for the Roosters.

The Bunnies have also received a boost, with Cameron Murray remaining on track to play after being ruled out of last week’s match with a first-minute head knock.