Rugby Australia has inserted a protective clause into the tender documents for its broadcast rights to ensure all bidders make a serious play or risk losing out in the early stages of the process.

According to people familiar with the documents, the provision has been included to allow for a fair competitive process and to ensure bidders lodge genuine bids for the rights, which include NSW and Queensland club rugby, the Super Rugby and Wallabies matches.

If one offer is a substantial percentage higher than another, that bidder can eliminate rivals by winning the process and avoiding further weeks of negotiations. 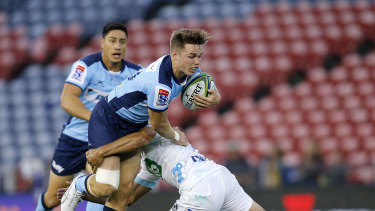 The protection will ensure all bidders are working on a level playing field.Credit:AAP

Sources close to Rugby Australia negotiations have said the clause has been inserted into all documents and applies to any company that bids for the full rights. The arrangement is not uncommon in sports, with the English Premier League including a similar structure in its negotiation process to incentivise bidders and create a more competitive process.

The inclusion of the provision comes after Optus lost The Rugby World Cup negotiations to Fox Sports, which merged with Foxtel, in 2018. Optus went hard at the rights to the Rugby World Cup when they went to market and was told it had them after outbidding Fox Sports, however World Rugby changed it mind at the last minute. Optus said it did not comment on speculation. Rugby Australia declined to comment.

Foxtel sources have said the company still has not signed the non-disclosure agreement and therefore does not have the tender documents. But Foxtel does not need to sign an NDA to lodge a bid for the rights and any bid could be considered by Rugby Australia if it is put forward. Those close to discussions said Optus and Network Ten have both signed NDAs, which led to the official tender process commencing last week. Amazon and RugbyPass and other commercial broadcasters were also sent the documents.

The new deal will include more than 400 games, including NSW and Queensland club rugby rights, the Super Rugby provincial competition, Wallabies Tests and the British and Irish Lions tour. The tender will include a blind bidding process and is expected to take up to six weeks. Rugby Australia is hoping to have the rights deal locked in before the annual general meeting on March 31.

Rugby Australia's tender in is the first open-market process for SANZAAR's home union games in 25 years. The tender process follows a tumultuous few months for the organisation, which has involved in a public stoush with incumbent broadcaster Foxtel, majority owned by News Corp.

News Corp mastheads have slammed Rugby Australia and chief executive Raelene Castle after the organisation hiked the price. Foxtel threatened to walk from negotiations, a move would end a relationship spanning more than two decades. However Rugby Australia still invited Foxtel to be part of its multi-million dollar tender process, issuing the organisation an NDA alongside streaming services, telcocommunications providers and broadcasters.

Optus is considered a serious contender for the rights with outgoing chief executive Allan Lew confirming the company’s interest in the sport two weeks ago. The telco has more than 800,000 active users for its streaming service, which is centred on the English Premier League and European soccer. However Optus sources have said the company is wary of not overpaying for the sport.

"We've got significant traction with soccer fans," Mr Lew said at the time. "Whether we take on other rights beyond just soccer is something that we will evaluate and it's certainly something [incoming chief executive Kelly Bayer Rosmarin] will look at."