Rugby Australia will go cap-in-hand to the federal government in the next 24 hours as the coronavirus outbreak looks set to push the game to the brink of insolvency over coming months.

With the federal government's ban on mass gatherings looking likely to stretch into the second half of the year, the escalating spread of COVID-19 threatens to throw into chaos the game's broadcast rights negotiations and put at grave risk rugby's cash cow, the inbound July internationals. 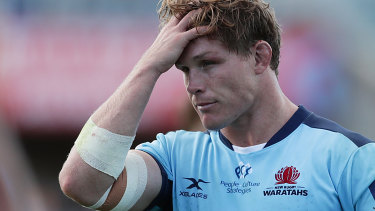 Michael Hooper reflects on the Waratahs’ defeat to the Brumbies on Sunday.Credit:Getty Images

RA was intending to enter the offer phase of the process this week but looks set to be counselled against that during meetings this week. Foxtel was already under intense pressure to cut costs amid falling subscriber numbers, while Optus, a telco wholly owned by Singapore-based Singtel, could be less interested in a foray into a new sport and more inclined to concentrate on shoring up its core business: mobile phone plans and customer service.

It is expected that that is the message that will be delivered to Castle and chief strategist Shane Mattiske this week.

It is the perfect storm for rugby, which was, at time of publication, the only Australian football code to have suspended its primary competition. The Brumbies v Waratahs derby on Sunday was the last game likely to be played this year as Australia followed New Zealand's lead in announcing strict new self-isolation measures for overseas arrivals.

The changes rendered Super Rugby's trans-continental operation impossible and left Australia's state and national bodies scrambling for some form of a replacement, in the hope of pulling together a competition that could satisfy requirements under the game's current broadcast deal, thereby safeguarding critical revenue.

"It’s a bit early to go down that path at the moment. There’s different models being looked at, we need to get some footy on the field at some stage," Brumbies chief executive Phil Thomson said.

The Sydney Rugby Union and NSW Rugby were in the early stages of talks to stage a beefed-up club competition, with all of the Super Rugby players sent back to their clubs.

The Brisbane club competition could also come into the mix, with sources telling the Herald that nothing was off the table, including a revival of the Australian conference should circumstances permit.

"I think there’s just uncertainty at the moment. We’re not sure what the future looks like," Thomson said. "It’s not a time to panic, it’s a time to be measured. Look at all the information from government, medical (experts), from Rugby Australia, from SANZAAR, and with all that information we’ll be doing our best to get rugby back on the paddock and have some good football being played on a consistent basis."

Regardless, rugby's finances are set to come under intense pressure. Head office is facing the likelihood of having to offset the loss of the Super Rugby clubs’ ticketing and sponsorship revenue and potentially go without the cash windfall of Ireland's scheduled July tour, all on limited funds.

The governing body reported $18 million in cash reserves this time last year, thanks in part to ongoing cost savings from the axing of the Western Force.

But sources indicated those reserves were eaten into over the past 12 months, in which RA fought a legal case against Israel Folau and missed the cash-generating inbound June internationals due to the Rugby World Cup.

To put this figure in perspective, the Richmond Tigers – a single AFL club – reported cash reserves of $24.4 million last year.

The estimated value of the AFL's future fund is about $100 million while the NRL is sitting on cash reserves of $147 million after generating $70 million in cash surplus over the past two years.

Both codes have four times the number of clubs to prop up compared to rugby, should their competitions be called off in coming weeks, a scenario that looks increasingly likely.

But the NRL's clear signal on Sunday that it would be calling on federal and state governments for financial help was a stark reminder of the fine margins on which sporting bodies and clubs operate, former NRL and FFA chief David Gallop told Nine's Sports Sunday program.

"These are thinly-balanced businesses, often running at a loss, reliant on private owners," Gallop said.

"This is the dangerous situation. The idea would never have been thought of that you wouldn't be able to play these games."

Tags: as, brink, on, Rugby, sp, THE, virus
You may also like
Latest Posts