St Kilda great Nick Riewoldt has questioned whether the Saints’ big-money recruits are suffering from “full bellies”, as president Andrew Bassat declared the club believed its premiership window was unlikely to fully open until next year.

The Saints are in a world of pain and their season hanging by a thread after yet another heavy defeat, this time by 111 points to the Western Bulldogs on Saturday. 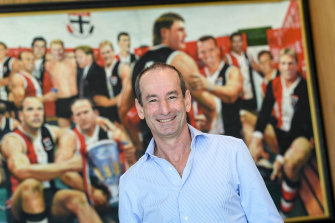 Chief operating officer Simon Lethlean fronted the media on Monday to accept full responsibility for the list rebuild, and to ease the pressure on coach Brett Ratten.

Bassat later also attempted to defuse supporter unrest in a letter to members, declaring the Saints were not yet in genuine premiership contention despite fielding the third-oldest side in the competition last weekened.

He even suggested last season’s effort, when the Saints finished sixth during hub life in Queensland may not have been what it had seemed.

“Reflecting now, we can appreciate that the circumstances of the previous season impacted us favourably,” Bassatt said.

“We had a good run with injury until later in the year and adapted to hub life better than some others. We knew that with our list profile we would need to be patient to be competitive every week against the better sides and that our genuine window would more likely start in 2022 than 2021.

“We need to be able to turn it around when things are not going our way and our backs are against the wall. We need to find a way to address this, both with short-term solutions and a long-term plan.”

Having ended a nine-year finals drought last year, the Saints again went to market to bring in established talent, including Brad Crouch, James Frawley and Jack Higgins to join the likes of Paddy Ryder, Dan Butler and Brad Hill in an attempt to win now.

But the Saints have only four wins this season, and four of their defeats have been by at least 54 points.

Riewoldt, the Saints’ longest-serving captain, said Ratten’s side was not a “dog-hungry group” and questioned the motivation of some players.

“You look at the purpose and the motivating factors, and you open yourself up to this sort of criticism when you dish up what you have,” Riewoldt said on Fox Footy’s On the Couch.

“I look at the list construct and I feel like St Kilda’s gone down a path of acquiring [experienced] talent. But when you go down any sort of recruiting angle, you’re building a team and you’re building a culture.

“There are some players there on a big whack [of money] that have got full bellies, that have come from other clubs that have had success.

“I just think at the moment the opportunity and security part of the motivation is far heavier than the hunger for real success.”

The Saints have a poor percentage of 72 after 10 rounds but are likely to make several changes at selection, with Josh Battle, Butler and Hill among those under pressure ahead of the clash against bottom-placed North Melbourne on Saturday.

Former Saints coach Grant Thomas took to social media to say his former club was “talking a big game at selection” but the “true test is who” will be axed.

There have been injuries – ruckman Rowan Marshall is a particularly major loss – but Riewoldt said “they’re reasons, not excuses, but the complete disregard … to defend on four occasions now and give defensive effort is there for us all to see”.