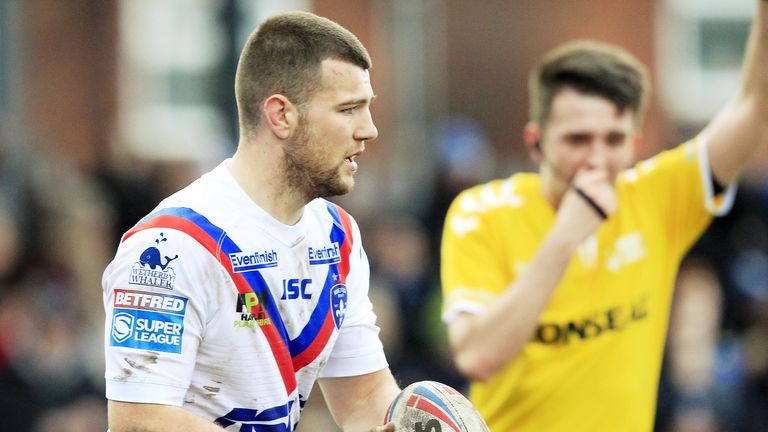 Salford slumped to their fourth defeat of the season in a 22-12 loss at home to Wakefield on Sunday afternoon.

Max Jowitt grabbed a try and kicked three goals as Trinity ground out the victory at the AJ Bell Stadium.

In a scrappy affair dominated by defence and errors, it was the visitors who managed to make the most of their chances.

Wakefield drafted full-back Jowitt into the halves with both Ryan Hampshire and Danny Brough injured. For Salford, Chris Atkin continued to deputise for the suspended Kevin Brown.

It was a cagey opening spell with both teams completing their sets and trying to build field position.

The Red Devils had a chance to break away in the 10th minute but Ken Sio dropped Pauli Pauli’s offload.

Salford did break the deadlock in the 14th minute, however, when Tui Lolohea found Sio in space on the flank and then supported the winger for the return pass to score.

The half-back was unable to convert his own try so it remained a 4-0 lead.

On 21 minutes Trinity loose forward Joe Westerman was forced off with injury, but the visitors nonetheless hit back soon after to go ahead.

Reece Lyne busted through the middle and Jowitt was on hand in support to cross. Jowitt made no mistake with his conversion from right in front.

Trinity had a great chance to increase their lead in the 26th minute, but Alex Walker spilled Ryan Atkins’ pass.

A man of the match performance, a try and three conversions! pic.twitter.com/4a1LAPPVbg

They then lost Jordan Crowther for a head test after he took a knock.

Salford hooker Joey Lussick went close to a try but was hauled down inches from the line and Wakefield’s Jacob Miller missed a drop-goal attempt on the stroke of half-time, meaning it remained 6-4 at the interval.

The Red Devils went back in front after the break when a quick shift to the right found Sio and the Australian dived over. Lolohea was unsuccessful with his kick from the sideline, but Salford led 8-6.

However, it did not last long, thanks to Tom Johnstone.

Atkins managed to draw in two defenders and throw a perfect offload to the winger, who strolled over. Jowitt added the extras and the visitors had a 12-8 buffer.

Wakefield tried to turn the screws and forced a goal-line dropout in the 56th minute.

It proved telling as Lyne set up Bill Tupou in the corner with a piece of brilliance. His one-handed offload released the winger to dive over acrobatically in the corner.

Jowitt could not convert the score but Trinity were in control at 16-8.

With the clock against them, Salford struggled to mount a response, and the contest was put beyond doubt when Kelepi Tanginoa barged through some soft defence to score.