‘Boring, boring Sarries!’ shouted one member of the crowd, with a mouthful of irony, after Owen Farrell’s side produced a masterclass in attacking rugby.

There is a new look in north London. A new stand and a new identity. The days of the one- dimensional box kick have been left behind for a new augmented reality.

This was unrecognisable to last season’s final. Saracens were brimming with intent and ambition, racking up a record points haul against the reigning champions. 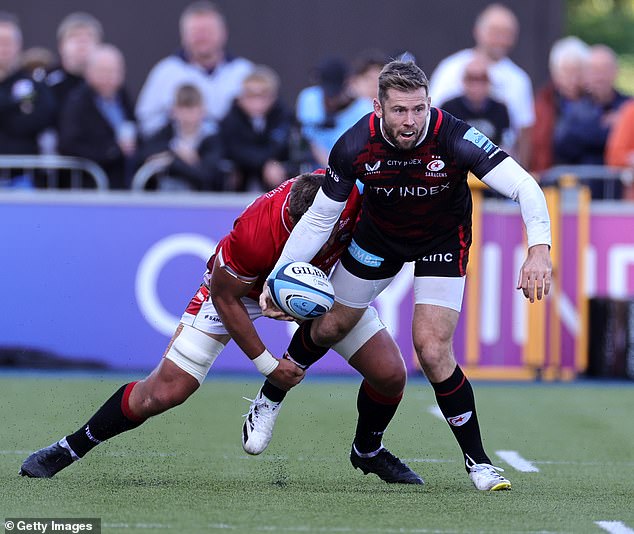 They ran the ball from deep in their own territory, with fizzing performances from Elliot Daly and Theo McFarland ensuring that revenge was served up with a side of champagne.

Leicester, in contrast, looked flat. They set out with a bash ‘em and smash ‘em game plan which ran out of steam after 20 minutes. They dominated the penalty count by 11 to two in the first half, but all they had to show was a try from James Cronin and eight points from the boot of Freddie Burns.

Saracens dominated the collisions, wrapping up Phil Cokanasiga in midfield and spotting Leicester’s heavyweight ball carriers from a mile off.

Their young lock combination of Hugh Tizard and Callum Hunter-Hill flew out of the line to leave their shoulders imprinted on ribs. 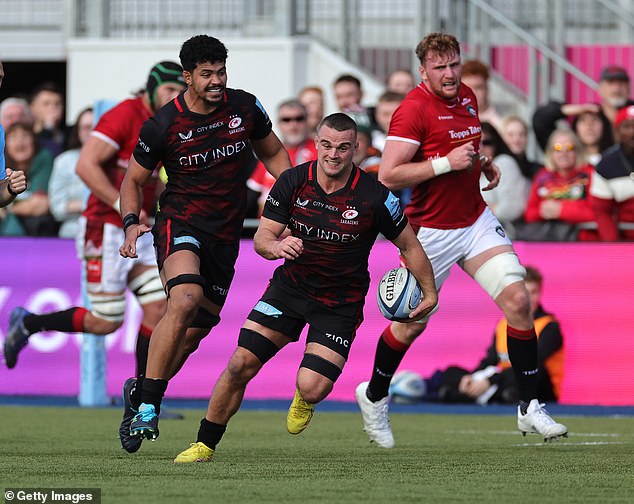 Some of the hosts’ tries were a work of art. Quick ball, sharp lines and deft hands. Intuition and dynamism in equal measure.

Alex Lewington finished an attack from his own 22 for the first, Ben Earl capitalised on quick ball for the second and Max Malins scored a mesmeric third after interplay from the forwards. Daly thrived with his new licence to play, knitting together strike runners and setting up Ivan van Zyl for the bonus-point try before half-time.

Freddie Steward edged Leicester back in it with a second-half try but the visitors’ lineout stalled. Despite the injury withdrawal of Jamie George, McFarland athletically dominated the set piece and provided the platform for Daly to score.

Saracens boss Mark McCall said of the England outcast: ‘Elliot was fantastic. He’s lost his international place for the first time in a long time.

‘It’s not easy for someone like him who has always been there. You saw his response and reaction and he hasn’t given up hope of going to the World Cup.’ Any hopes that Leicester’s World Cup-winning recruit, Handre Pollard, would turn things around were shortlived. The playmaker lasted just 28 minutes of the game before withdrawing with injury. 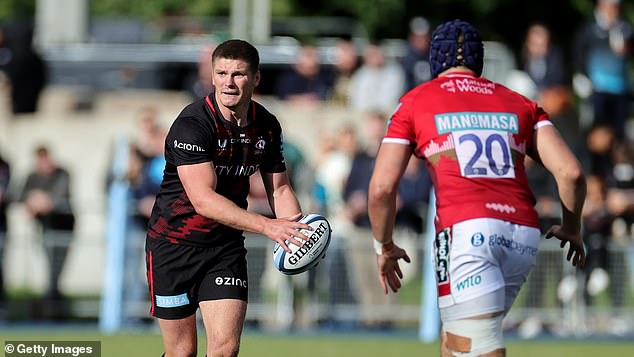 Tigers coach Steve Borthwick, still adapting to life without Ellis Genge and George Ford, admitted his side have work to do, saying: We had players playing their first games of the season and when you have that you have a bit of rust.

‘We played some good rugby and some pretty clunky rugby. We are going to have to work through this period as we develop our cohesiveness.

‘Saracens are a team packed full of power and pace. There is a lot less power in the English game; it is very expensive and tends to go elsewhere. They have got superstars throughout their squad and superstars who aren’t in their team or not been able to make the 23.’

Farrell edged his side further ahead with a penalty. Leicester’s discipline crumbled, with Tigers coach Brett Deacon throwing a water bottle across his technical zone in frustration.

Sean Maitland took the scoreline past the half-century when he swooped on a loose ball in the final play, leaving the home crowd thoroughly entertained.