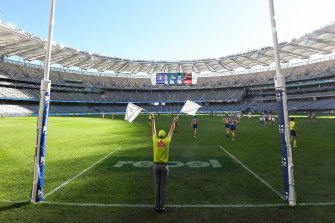 Goals have begun to dry up after a high-scoring start to season 2021.Credit:Getty Images

After an early-season scoring spree and then only a small flattening from that starting burst through most of the first half of the season, scoring in the AFL has dipped sharply in recent weeks.

Given that strong start and relative hold through the bulk of the season, the AFL’s rule changes – particularly the man on the mark rule – were lauded for opening the game up.

Along with the dip in scoring, Champion Data stats reveal a rise in some key indicators that track the trends of congestion in recent weeks.

Throw-ins and ball-ups have risen sharply through the season, while the percentage of the times teams are able to convert rebound-50s into inside-50s has fallen.

Inside-50s on the whole have dropped slightly, while the percentage of total possessions that are contested have risen.

It was interesting to note the comments of one AFL assistant coach who spoke to The Age before round five.

He said the rule changes had encouraged clubs to have a more attacking mindset early in the season, but predicted that would halt as teams became more desperate in fighting for ladder position, and as injuries and the general wear and tear of the season dragged on.

“It [attacking] is slowing up a little bit already,” he noted after round four. “And that does happen, usually early most years the attack is on top but defence takes over.

“It is going to be a really interesting month these next four weeks to see how teams attack.”

Tags: as, congestion, down, Scoring, up
You may also like
Latest Posts