Josh Dugan is facing the prospect of police charges after he was allegedly caught breaking COVID-19 laws twice on the same night.

The NRL integrity unit is investigating the matter after Dugan was caught in Lithgow travelling with a friend, more than 100 kilometres from his home in the Sutherland Shire.

“Officers from Chifley Police District were conducting patrols in Lithgow when they stopped a Jeep Cherokee at the intersection of Main Street and the Great Western Highway about 11.30pm yesterday [Friday],” NSW police said in a statement.

“Police spoke to the driver, a 31-year-old man, and his passenger, a man aged 30. The men allegedly weren’t wearing masks and checks revealed they were from Gymea and Alexandria. The driver allegedly told police they were moving to the area and were going to feed animals, however later admitted they were heading to a friend’s house for the weekend.

“They were directed to return home. About 40 minutes later, officers detected the same vehicle travelling away from Sydney towards Yetholme. The men were stopped and again directed to return to their homes. Charges are expected to be laid.”

The NRL fined Dugan $25,000 in June for failing to comply with biosecurity protocols when he attended a Potts Point restaurant. The players were under level three-plus restrictions at the time and the Cronulla centre was forced into an immediate 14-day quarantine period. The Sharks opted not to take him to Queensland when Sydney teams were relocated. 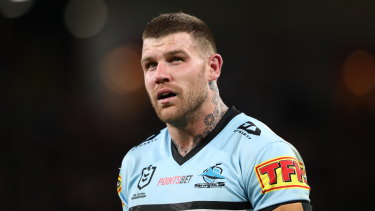 Off contract at the end of the year, the latest incident won’t help the former NSW three-quarter to find a new deal.

“The integrity unit is aware of the matter and is liaising with NSW Police and the club,” the NRL said in a statement.

The Sharks have already made it clear they won’t be re-signing Dugan and the new setback caps a tumultuous stint at the club. The former Raiders and Dragons star has struggled to live up to his reported $800,000-a-season salary and it is unlikely he will be adding to the 215 first-grade appearances he has made during an NRL career that started in 2009.

Meanwhile, the Sharks have added Steve Price to their coaching staff from next season. The former Dragons head coach will be an assistant to Craig Fitzgibbon, returning to the club after assisting in the premiership-winning season of 2016.

Price has been coaching the Warrington Wolves since 2018, but will return to Cronulla as an assistant coach alongside Josh Hannay and Daniel Holdsworth. Price’s new contract with the Sharks is for the next two seasons.

“Steve had plenty of options after he made his decision to return to Australia and we are thrilled he chose the Sharks over the other interested clubs,” Sharks CEO Dino Mezzatesta said. “His credentials are second to none and the board and management are pleased to have secured his services.

“He has expressed his excitement around the rebuild off the field and was also attracted by the roster being assembled under Craig, which made this coaching opportunity at the Sharks especially appealing.

“Steve has a place in our history books as someone involved with our winning team in 2016 and we were delighted to be able to bring him home and for him to be part of what we are building here at the Sharks,” Mezzatesta said.

Incoming coach Fitzgibbon was also pleased to add such an experienced coach to his staff.

“I’m really looking forward to working with Steve,” Fitzgibbon said. “While we’ve known each other for some time [and] the opportunity to work together is an exciting one. The experiences he’s gathered and his love for the area and club were hard to ignore.

“I thought Steve’s experience in the NRL and in the Super League as a head coach, added to the fact he was an assistant in the 2016 Sharks premiership, would be an asset for myself, Josh and Daniel and we look forward to pushing each other and developing as a coaching team.”