Kade Simpson’s AFL career will not be revived with the former Carlton star opting not to nominate for next Wednesday night’s mid-season rookie draft.

Simpson, 37, had last month flagged an interest in putting his hand up to be taken in the mid-year pool after the Blues chose not to extend his 342-game career at the end of last season. 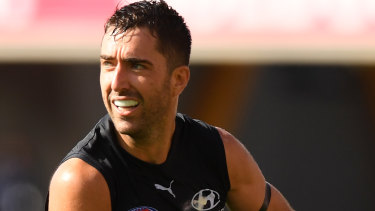 Blues stalwart Kade Simpson won’t be picked up in the mid-season draft.Credit:Getty Images

But Simpson’s name was not on a list of around 600 players distributed by the AFL on Wednesday. The deadline to nominate was 5pm on Tuesday.

Fellow former AFL players Nathan Freeman, Riley Knight and Wylie Buzza have all nominated in the hope of another chance at the top level.

Tags: as, comeback, dream, over, Simpson
You may also like
Latest Posts