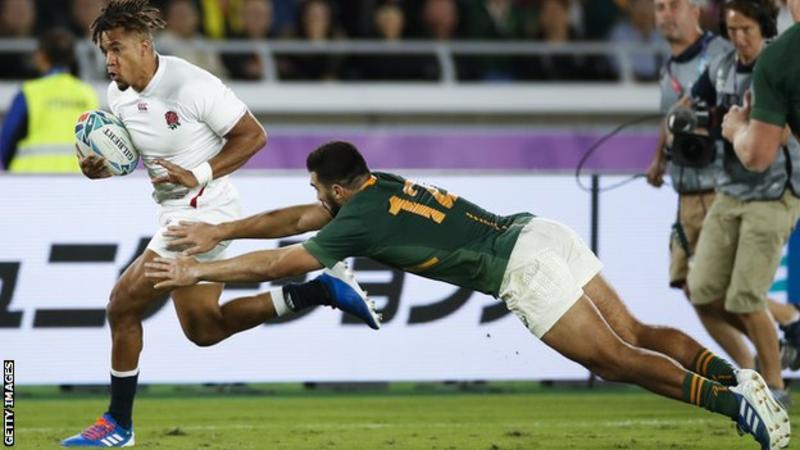 Rugby World Cup stars Anthony Watson and Mark Wilson have been called up to a 25-man England training squad for their Six Nations match against Wales.

Bath wing Watson has yet to play in this year’s Championship because of a calf injury.

Meanwhile Newcastle flanker Wilson – who is on loan at Sale – recently returned to action after knee surgery.

Wilson last played for England in November’s World Cup final loss to South Africa and England assistant coach Steve Borthwick says the 30-year-old has “worked exceptionally hard” to get back into the squad.

“He looks in good shape and we will have a good look at him over the next couple of days.”

Saracens back-row forward Ben Earl, who won his first caps against Scotland and Ireland, has not been included, while Exeter prop Harry Williams has been preferred to Bath’s Will Stuart.

Northampton full-back George Furbank, who missed the win against Ireland, will continue his rehabilitation in camp.

Head coach Eddie Jones’ slimmed-down squad meet on Wednesday lunchtime in Oxford for three days of training before the game at Twickenham on 7 March.

England re-established their Six Nations title credentials with a 24-12 victory over Ireland on Sunday.

‘We are focusing on what we can control’

Ireland’s Six Nations game against Italy has been postponed because of the coronarvirus situation, with 11 towns currently on lockdown in Italy.

Jones’ side are due to travel to Italy for their final game on 14 March and hooker Jamie George compared the uncertainty to that caused by the typhoon which hit Japan during the World Cup, leading to the cancellation of one of England’s games.

“No-one has an idea of what might happen, so it’s a difficult one for us at the moment,” George said at a grassroots England Rugby event in Oxford.

“We’ve had to deal with stuff like this before, with the typhoon in Japan. So these things happen, it’s out of our control. Eddie [Jones] speaks about it a lot – and it’s a cliched answer – but [it’s about] focusing on what we can control.

“We are as prepared as we can be if anything does happen. You hear rumours about what might happen, but in sport you can’t rely on rumours. We will be listening to the health experts and the Rugby Football Union and will be able to make a decision off the back of that.”