There was a moment, with more than 10 minutes still to go of his side’s Six Nations win over Ireland, when Eddie Jones pointedly walked the length of England’s bench and shook the hand of every player on it.

Jones never does anything without some internal reason. He calculates and he tries to control. When he finds a line he likes he uses it in every interview – television, radio, press conference – to make sure no-one misses the point.

And so his actions at Twickenham were as much for those watching as those mangling his fin. Look at the faith I have in these men. Look at how well they have done. Look at the belief I have in what we are doing.

Because Jones is smart enough to know that he has been under pressure, strange though that may sound when this was England’s first game at home since making the World Cup final.

He is as good a coach as he is because he is relentless in pushing those around him and under him. That brings its own price. People get worn out. The relentless digs can start to sound tedious. Not everyone can be so flat out so often.

All through this Six Nations he has been edgy and ornery. There were the comments before England’s opening game against France, the ones about becoming the greatest team in history, and there were the digs at elements of Scottish support before Murrayfield. This past week he has been alternatively monosyllabic and effusively caustic.

In the aftermath on Sunday he was almost provocatively triumphant.

“If it was a cricket match,” he told BBC 5 Live, and then to newspaper reporters shortly afterwards, “we would have declared at half-time.”

Declaring on 17 for the loss of no wicket would be quite the attacking decision, even for an Australian who remembers Adam Gilchrist at Headingley in 2001. Jones could throw it out there because no-one was going to argue with him.

For the first 40 minutes England were everything they can be under his command: quick, powerful, relentless. They kicked superbly, crashed Irish runners backwards and punched repeated holes in the green wall themselves.

It was a highlights package of the Jones years, a best of… compilation to keep the half-cut celebrants in the Twickenham stands dancing out into the west London night. 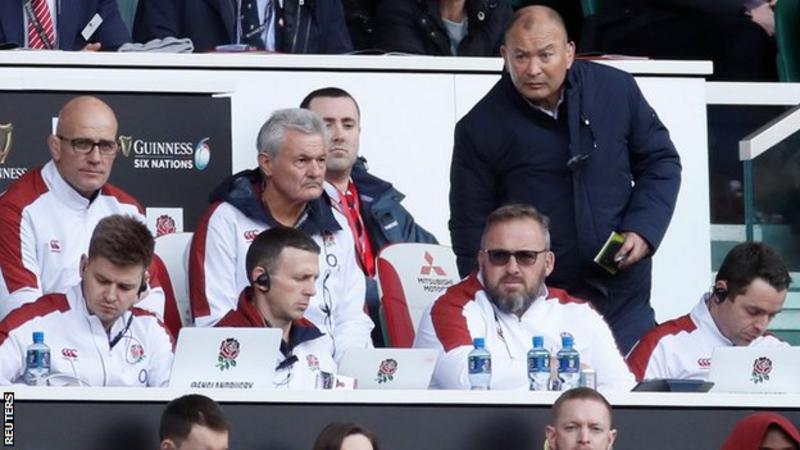 Courtney Lawes led the way but almost all of the forwards made the ball sing, off-loading from the tackle, hitting runs at speed, scrapping for quick ball and excavating it from Irish hands and rucks.

Behind them George Ford ran with the ball in two hands and Jonathan Joseph showed why Jones might have picked a 50-cap centre on the wing by coming inside to step and slide at every opportunity.

When England play like this they can look close to unstoppable. The thing that nags and picks at Jones is that he can’t get them to do it all the time. Big, authoritative wins are followed by slow-motion retrenchments. They win in Dublin and then stumble in Cardiff. They dismantle the reigning world champions and then fail to fire a shot in the final.

So he keeps throwing out the digs and jabs, angry at the world, still trying to prove himself to an audience that harbours only limited doubts, and even then the reasonable, logical type.

He was asked afterwards if the team’s display justified his less obvious selectorial decisions. It was a gentle question, served up like a half-volley ready to be slapped away, yet he went at it with a great heave of the bat.

“Look, I don’t need vindication. You guys are so clever, you’re all clever so I’ve just got to suck it all up, enjoy what you say, try to learn from you and maybe I can pick a better team next week.”

That is Jones as he wants to be seen, picking fights, loving every minute of a scrap where the opponent isn’t even sure they’re an opponent, where they’re actually paying him a compliment he has no interest in receiving.

The actual opposition could not have been more generous. Both of England’s first-half tries were created by clever kicks in behind an on-rushing Andy Farrell defence but owed their consummation to errors by the covering defenders, first Johnny Sexton and then Jacob Stockdale.

Sexton, such a dedicated and courageous servant to the cause across the last 11 years, had a game to haunt him into his dotage, leaving another five points out there with a shanked penalty and conversion, slipping over on his backside at one point after losing a boot in a ruck.

His half-back partner in so many grand adventures, Conor Murray, had his own bad day out. There was a hooked clearing kick that led to Joseph cutting a swathe through the Ireland defence and an absence of the control and certainties of old.

These two have been the foundation for so much of what has been great about Irish rugby across the past decade. How Andy Farrell decides to navigate the next part of their international careers may dictate the long-term success of his time at the wheel.

His fledgling Ireland side played the game back-to-front. Only when it had been snatched away from them did they find their energy and edge. They had 61% possession and 58% territory and conceded five fewer penalties than England and none of it meant anything, because they had dug themselves such a hole in the first 40 minutes that it would have taken Armand Duplantis to get out of it.

It never became a Farrell vs Farrell game because it only became a true contest when the victor had already been established. England could cruise the second half, throw a few loose passes, leave plenty of points out there.

Jones didn’t need to spell it out. When it works with his England, it really works.

Chelsea will not stand in Olivier Giroud’s way in January transfer window, says Frank Lampard
Recent Posts
This website uses cookies to improve your user experience and to provide you with advertisements that are relevant to your interests. By continuing to browse the site you are agreeing to our use of cookies.Ok