Scotland ran in three tries against Italy to earn their first win in six games in the Six Nations and ease the pressure on head coach Gregor Townsend.

Captain Stuart Hogg’s stunning solo effort in Rome was the Scots’ first of the campaign and was added to after the break by centre Chris Harris and late on by fly-half Adam Hastings.

Italy, searching for a first Six Nations win in 25 matches since beating Scotland in 2015, failed to breach a resolute defence and are rooted at the bottom of the table after three games.

Scotland, though, can look forward to the visit of France on 8 March with renewed confidence, before ending their campaign against Wales in Cardiff six days later.

Ugly, but a win is a win

Having won just one of their previous seven in the championship, this was a game Scotland had to win, not just for their morale but for Townsend, who would have come under ferocious pressure had this one gone south.

They won, but nobody was doing cartwheels on the full-time whistle. Harris, Hogg and Hastings, the try-scorers, all spoke afterwards in the low-key style of men who knew that Scotland have masses of work to do.

And they do. This was ugly, but it was a 17-point win. Scotland are not in the business of turning their noses up at 17-point wins no matter how they are achieved.

It was nervous out there. Scotland’s recent problems in finishing the chances they created came back to bite them again early on when they worked it to Italy’s line only for Magnus Bradbury to knock it on when a little more patience would surely have brought a score.

Bradbury, it has to be said, went on to have a big game along with outstanding back-row colleagues Hamish Watson and Jamie Ritchie.

Mistakes ruled. Scotland kicked out on the full, Italy got turned over on the floor. Hastings had a gimme three points, but missed the penalty from close range, then put in a poor kick that was seized on by the Azzurri, who attacked through Mattia Bellini and Jayden Hayward.

Hastings had a rough time of it, missing three kicks at goal on a fractious day.

An Italian chance went when Scotland’s scramble defence snuffed it out and back we went to the anxiety of two teams who have almost forgotten how to win game of this import. The match was finally lit up by Hogg’s moment of world class, a counter-attack that saw him getting the ball in his own half and running at pace at the retreating Italians.

He accelerated between Luca Morisi and Sebastian Negri and then stepped outside Hayward, all of it done at break-neck speed. It was his 20th Test try and he’s scarcely scored a better one.

No way was he dropping it this time. In a repeat of his touch down for Exeter last weekend, Hogg hugged the ball to his chest and grounded it safely.

Scotland thought they’d scored again soon after but Watson’s pass to Sam Johnson was forward and Ali Price’s finish was ruled out. Italy, playing a frenetic new style, carried a threat and bust Scotland open on a couple of occasions but couldn’t find the accuracy when they needed it most.

They had a chance to get on the board but Tommaso Allan’s penalty came slapping back off an upright.

Another Scottish chance went begging before the break when they lost control short of the line and, just after the interval, they coughed up another opportunity. That one was painfully close, Watson taking it up, Bradbury piling though in support and then popping it to Ritchie, who was in the act of scoring when Jake Polledri hit him hard and dislodged the ball from his grip.

Italy’s respite was relatively brief, though. Their exit was poor and once again they got done at the breakdown. Fifteen phases of grunt later, Harris battered his way through Matteo Minozzi to make it 10-0. It wasn’t pretty – in fact it was gruesome – but it was effective.

Hastings’ challenging afternoon continued with a missed conversion and then a loose pass that handed Italy momentum. They came roaring downfield and once more the Scots were scrambling in their own 22 – and scrambling excellently. Just when it looked like the home team might get their breakthrough, Bradbury turned over ball and the danger passed.

Just before the hour, Scotland should have put it to bed but Hogg went himself when he should have found Sean Maitland, who would have a fairly straightforward route to the line had the ball been put in his mitts.

As a Test, it was massively flawed. So many unforced mistakes, so little quality. It was bottom-of-the-table stuff in every sense. Scotland will breath a mighty sigh of relief having won it, but they’d better set aside a full day this week to pore over the errors they made, the chances they blew, the passes they forced, the kicks that went astray.

Italy’s woe carried on when Federico Zani, the substitute hooker, was binned for a dangerous tackle on Grant Gilchrist. Things went form bad to worse while Zani was away.

With two minutes left on the clock, Italy launched a promising attack in pursuit of a losing bonus point score. They got into Scotland’s 22 but their horrors on the floor did for them again when Gilchrist turned them over.

The Scots countered and Hastings was put away to score with ease. He converted, with a drop goal, and the gap stretched out to 17.

A Scotland win on the road, then. That’s something they have always found difficult no matter where they happen to be playing. It provided some desperately needed cheer amid difficult times, but this was a tough watch.

Italy were poor and have fallen now to a 25th defeat in a row in the Six Nations. At least Scotland have the balm of a victory as they ready themselves for the arrival of France in a fortnight. 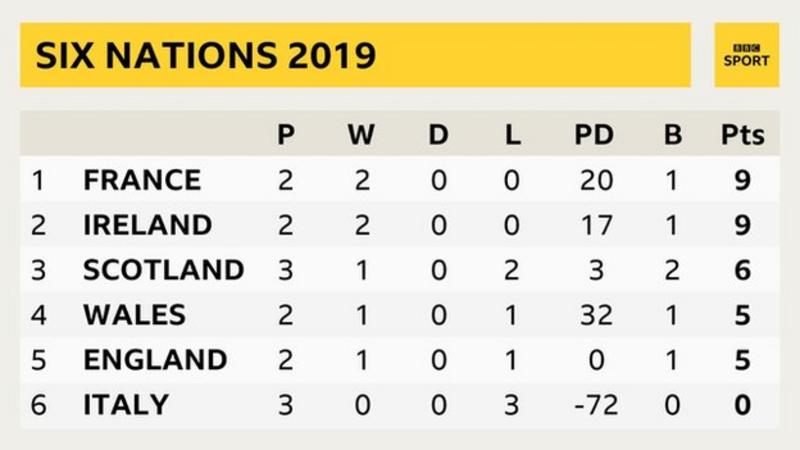