Latu Fainu has just signed a contract that could result in him becoming the highest paid player still to reach NRL level.

Just months after celebrating his 16th birthday, Fainu has inked a mammoth four-year deal with Manly. If he hits the performance targets in his contract extension, the teen pivot will earn a seven-figure amount during that period. 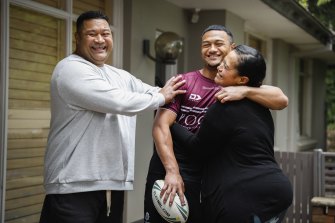 Latu Fainu with parents Lile and Chris at their home on the northern beaches.Credit:Renee Nowytarger

Moses Suli made history as the game’s highest-paid teen when he signed a three-year, $1.3 million contract extension in 2017 with Wests Tigers at the age of 18. The Sun-Herald can reveal Fainu will outstrip that figure if he triggers a series of bonus benchmarks once the deal kicks in next season.

Rival clubs – including Parramatta, the Warriors and the Dolphins – were lining up with their chequebooks in a bid to prise Fainu from the northern beaches. However, the opportunity to secure his financial future and potentially play first-grade alongside his three brothers – including suspended Manly hooker Manase Fainu – proved impossible to turn down.

In a further boost to the club, older brother Samuela Fainu – a 17-year-old forward – also extended his contract until the end of 2024. Sione Fainu, a promising 20-year-old prop, is on the club’s books as well.

“It’s a dream come true,” Latu said. “It’s great to be able to stay here with my brothers. Hopefully we get the chance to all play in the NRL together. That would mean a lot to the family.” 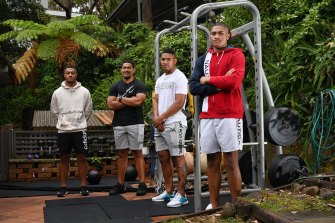 (From left) Latu Fainu with his brothers Sione, Manase and Samuela.Credit:Nick Moir

Good judges believe Fainu has the talent to make it to the very top after the five-eighth was named the player of the series in the Harold Matthews Cup. The achievement is all the more impressive given he was the standout in the under-17s competition – he had a hand in four of his side’s five tries in the grand final win against Parramatta – when he was still aged 15.

Latu recently agreed to become an Adidas ambassador, and is believed to be the youngest Australian athlete to do so.

When asked what he planned to do with the windfall coming his way, Latu said: “I want to buy my mum a house. To be able to do that would be a dream come true. That’s what I want to do.”

Told about Latu’s intentions, his mother Lile – who has eight children – became tearful.

“We’ve had to go through a lot to make ends meet when they were growing up. While growing up it was just their father [Chris] working and we were living on one income. They knew the drill; they would ask me for some money and we would have no money, it was ‘Wait until payday’.

“They knew why we had no things, why there was no money to buy a loaf of bread. The struggle is real and they understand it. I think that’s what made them push more to excel in their careers.

“My husband and I have felt it in each of them. They looked at how we’ve struggled, so they try to work hard to make their lives more comfortable. I don’t need to be rich, I just want them to enjoy their life.”

Latu Fainu is tipped to push his way into the NRL about the same time Manly captain Daly Cherry-Evans finishes his career.Credit:Renee Nowytarger

Fainu is tipped to push his way into the NRL about the same time Manly captain and playmaker Daly Cherry-Evans finishes his career.

“Latu is one of the game’s brightest stars and there was a lot of interest in him, but he couldn’t be happier to secure his future at the Sea Eagles,” said Mario Tartak of Crown Sports, the manager who also brokered the Suli deal. “Good judges believe he has the potential to become an absolute superstar.

“All four of the boys feel at home at Manly and, hopefully, they will fulfil their dream of playing in the NRL together.”

The new deal will further shine the spotlight on Latu, but big brother Manase doesn’t think he’s the best footballer in the family.

The family is hopeful it can emulate the feats of the Burgess brothers – Rabbitohs Sam, Tom, Luke and George – who were the last quartet of siblings to take the field at the same time in 2013.

“That would be something very special,” Fainu said. 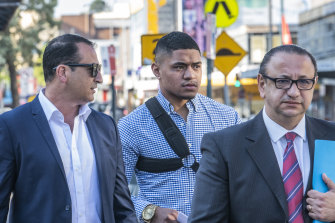 Manase Fainu (centre) arriving at Liverpool police station at the start of his legal battle in October, 2019.Credit:Louise Kennerley

Manase Fainu has asked the NRL to reconsider his suspension under the no-fault stand-down policy as he braces for his career to remain in limbo for a third season.

COVID-related delays to the court system have resulted in his hearing being pushed back on several occasions and the matter now won’t be heard until the middle of next year.

The NRL will allow Fainu to continue to train with the Sea Eagles until the case is resolved, but the hooker is frustrated some of his best playing years are going to waste.

“I know where they are coming from but, at the same time, they should reconsider it,” Fainu said.
“I’ve wasted two years by not playing. My court case has been pushed back a couple of times now because of COVID. They wouldn’t have known that would come.

“I’m not playing and I’ve lost sponsorships as well. I’m just surrounding myself with positive people. Hopefully I can get back on the field.”

The NRL’s stand-down rule came under renewed scrutiny when two juries failed to reach a verdict in Jack de Belin’s two trials on charges of sexual assault. The former NSW lock was sidelined for two-and-a-half years before the Director of Public Prosecutions dropped the charges.

“We appreciate that the NRL has a duty to protect the image of the game and that’s why the no-fault stand-down rule was brought in,” Fainu’s manager Tartak said. “Given Manase has pleaded not guilty, we respectfully ask that the NRL reconsider its stance.”

There has been another impediment to Fainu’s immediate return. The hooker has had ongoing complications with a shoulder injury that will require further surgeries.

“I’ve got to go in for another op at the end of the month,” he said. “Then two weeks after that I’ve got to get another one for the front of my shoulder, so it’s a four-week process to do this.”

Fainu said he was enjoying watching his talented siblings rise through the ranks while sidelined.

“I’m proud of them,” he said. “When I was their age, I wasn’t talked about that much. They are far ahead of me. I’m not even the best in the family and I made it, so fingers crossed that they follow the same path and all have a crack at a [NRL] debut.”

Tags: sensation, sig, Sixteen-year-old
You may also like
Latest Posts