Cumberland City Council mayor Steve Christou has vowed to save the Western Sydney Two Blues, slamming the ploy to merge three struggling Shute Shield clubs as a play that ‘smacks of jealousy and elitism’.

The Two Blues, West Harbour and Penrith are fighting for Shute Shield survival after a draft participation agreement for the 2022 competition stipulated each club must field four grade teams, three colts sides, a women’s team in 2023 and several other benchmarks which the clubs do not currently meet. 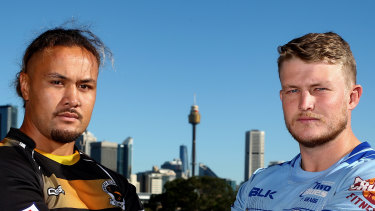 Andrew Fiagatusa of Penrith and Riley Jacobson of Two Blues pose during the 2021 Shute Shield launch.Credit:Getty

The three clubs have all dismissed talks of a proposed merger and Christou is the latest key figure to take aim at the six clubs pushing for the amalgamation.

“I was disgusted to hear of the attempts to force a merger of our local Two Blues Rugby team with another club,” Christou said.

“It’s been orchestrated in secret by the elitist eastern suburbs and north shore clubs, just as council is finishing a new $13.5 million stadium and international standard rugby field at Granville Park for the Two Blues.

“It’s typical of the wealthier clubs in wealthier suburbs to dismiss the western clubs who have worked so hard to build the sport to provide opportunities for young people from lower socio economic communities.”

The Two Blues will play their final home game of the season at the new stadium and Christou told the Herald he will do everything in his power to ensure it is not the last time the club play a home game there.

“When I say we will use every resource to defend them, that means every resource. That might be political resources, that might be media resources. We will go to whatever levels we have to to make representations on their behalf because it’s just not right,” he said.

“And just when council steps up and offers that and gives our local rugby club a chance to compete at a very high level, they go and pull the rug from underneath them.”

Christou called for a three-year window to allow the Two Blues to capitalise on the sponsorship opportunities provided by the new facility.

“You just can’t have a secret meeting between the six most powerful clubs and say – these are the conditions for next year. Give them a timeframe of three years. These are the expectations,” he said.

“You now have this ground which will attract new sponsorship. If they can’t get their act together in three or four years and meet the standards that are being proposed, then by all means, do what needs to be done.

“But you just can’t pull the rug from a club and a community and a council that has invested $13.5 million to bring this community up to scratch.

Tags: ‘Smacks, and, elitis, jealousy, of
You may also like
Latest Posts