Snap Shot is a weekly column taking a look at the lighter side of football.

Former Western Bulldogs player Brian Cordy arrived in Broome last month after spending the previous six weeks camping in the middle of nowhere around the top of Western Australia to wait for his wife Karen to rejoin him from Victoria.

What better way to kill the time than to walk from the Cable Beach Caravan Park into the Divers Tavern to watch his son Zaine play for the Western Bulldogs against Carlton. 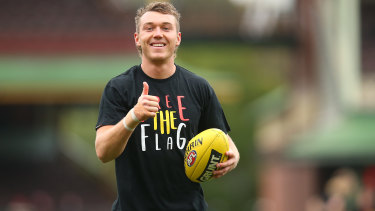 Patrick Cripps preparing for the Blues’ clash with the Sydney Swans.Credit:Getty Images

The only problem was finding a television showing the match, when every TV seemed to be tuned into West Coast’s snoozefest against Hawthorn at the MCG that day.

Cordy eventually spotted a small TV in the corner of one of the pub’s quietest bars, with one man perched in front of the screen holding a pint of beer for company. Cordy pulled up a chair and the pair got talking.

Soon it became evident that the man with the keen interest in the Blues was the Carlton skipper’s dad, Brad Cripps, who was travelling in the region with a bunch of mates. The pair watched their sons go at it as the Bulldogs eventually ran down the Blues to win by 16 points.

“He is a lovely fella,” Cordy said about Cripps’ dad.

“I was the one smiling at [the result at] the end so I had to buy a round of beers.”

They took a photo together so Brian could send it to the Curnows’ parents – Charlie and Zaine are mates from their schooldays – with the message ‘you wouldn’t guess who I bumped into’.

Eventually their catch up made it on to social media after Brian’s brother Neil – a media veteran who also played 235 games for the Bulldogs and the Swans – received the picture and sent it on for all to see.

As Brian says, parents of players have a bond, with most more concerned about their child’s welfare than how many kicks they get. As luck would have it, the pair also bumped into Darcy Cameron’s dad at the Divers Tavern that afternoon.

Now in Geraldton after spending time on what the Cordys describe as the magnificent WA coast, they will time their run perfectly to watch the Bulldogs play at Optus Stadium against Fremantle on Sunday and you can bet they will watch Patrick’s career unfold with renewed interest.

Was Riewoldt’s grab the best chest mark taken by a No.8 Tasmanian wearing a Tigers jumper?

Until Sunday, when Jack Riewoldt flew into the history books with his wonderful mark against the Giants, Michael Roach could lay claim to the best mark ever taken by a Tiger.

Roach’s mark against Hawthorn at the MCG in round five of 1979 is as famous as it was brilliant, a photographer capturing perfectly the moment when Roach took the mark hovered above a Hawthorn pack that included Hawks full-back Kelvin Moore and ruckman Terry Moore.

The Tigers voted it the best mark ever by a Richmond player when they celebrated their centenary in 2008. 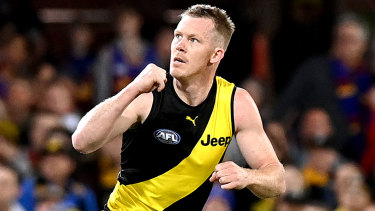 But in the past two months, as Shai Bolton soared to the sky against Geelong in round eight and then Riewoldt did the seemingly impossible against the Giants, Roach’s mates have begun sending him texts telling him he was in danger of losing the title.

After Riewoldt’s mark, poor Roach can’t even claim to being the undisputed title-holder of the best chest mark taken by a former Tasmanian wearing the Tigers’ No.8 jumper.

“It was bloody courageous…I am a big Jack Riewoldt fan,” Roach said. “I’ll share it with him.”

Roach, who kicked 607 goals in 200 games with the Tigers, including a century in their 1980 premiership year, received nothing but a framed picture of the famous mark he took against Hawthorn in round five, 1979 when the ABC awarded his sensational grab the mark of the year.

Roach still has a few copies of photos taken of the mark but does not display them anywhere, with team photos taking pride of place. Although, his sense of humour hasn’t disappeared.

“I did think of using [the photo of the mark] to wallpaper my house,” Roach said.

And who could blame the famous No.8 who has the Tigers’ goalkicking award named after him, an award that Riewoldt and fellow Tasmanian Matthew Richardson have won 23 times between them since Roach’s career ended in 1989, a decade after the famous mark.

“It was just one of those lucky grabs in my younger years when I could jump and it was great that there was someone there that was able to [capture it in a photo],” Roach said. 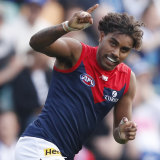 That thought occurred to Snap Shot when we noticed that emerging small forward Kysaiah Pickett turns 20 on Wednesday, sharing a birth month with a couple of other small forwards Demons fans remember fondly.

Tags: and, Bulldog, shot, snap, THE
You may also like
Latest Posts