Well that went down a treat, didn’t it?

Of all the astonishments of the past week, the biggest is how, in rugby league or any professional sport where the weekly lesson is that someone wins and someone loses and nothing is earned without sacrifice, when it comes to cultural or social gestures everyone continues to think it can be simple win-win, and life is all sunshine and, er, rainbows.

The formula goes like this. Let’s dress up our sporting event in an important social issue. Women. Indigenous. Mental health. Kindness. Oh bugger, everyone’s claimed every issue, so let’s just call it ‘Everyone in League’ week. Can we make it nice and positive? Can it make us feel good about ourselves and forget that our salaries are paid by gambling and alcohol companies? Can it divert attention from our players who are currently facing/evading/rehabbing from assault charges? Can it be packaged into saleable merchandise? And above all, can it come at no cost: no sacrifice, no trouble, no complication?

So tell us how that went.

This is not an attack on Manly, a club for whom even supporters are caught in a jumble of mixed feelings. Among those feelings are admiration for the salvage job conducted firstly by Des Hasler and Daly Cherry-Evans and then by their players on Thursday night. In fact, the Sea Eagles have bungled their way into breaking new cultural ground. In playing the match in their rainbow jersey, while letting their ‘religious and cultural’ dissenters stand aside, they have set a standard. For once, standing by a principle has entailed a sacrifice: of reputation, of unity and of two precious competition points. Are many (any?) other clubs willing to throw their season away, now that they know what they’re in for? Didn’t think so. 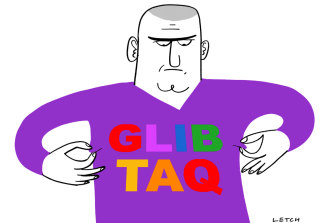 Because Manly fell into this by accident, they deserve no special praise. But they have joined a rare group of sportspeople who have made a political or social statement that has cost them. The others are actual heroes because they knew what they were in for. Ian Roberts, coming out as gay, knew the rubbish he was going to cop. Nicky Winmar, showing his skin to a Collingwood crowd, embraced the consequences. Tommie Smith and John Carlos knew they would be ostracised, just as Muhammad Ali knew he would be banned from his sport if he didn’t go to war.

But they are few. Today’s currency is to make a social statement only on condition that it will win you friends and cost you nothing.

Let’s revisit what sports are trying to do with social and political gestures: grow their audience AND raise awareness of serious community-wide problems AND sportswash their internal issues AND educate the masses AND look after the culturally diverse groups in their own ecosystem AND, in case it’s an afterthought, put on a good game for their fans. All achieved with a smile and a rainbow.

This is fantasy league, but pro sports have been playing it for years, coasting by on a shallow symbolism that they mistake for the hard graft of genuine tolerance. Australia’s biggest football codes celebrate women while never giving them full professional resources, respect or status. (Women in League week extols the inches the game has clawed towards equality. We’ll believe in equality when Belinda Sharpe referees a men’s Origin match and, in commentary, retired club second-rower Phil Gould asks retired dual international Allana Ferguson a question, any question, but how about: ‘Can you tell us what happened in that play?’) 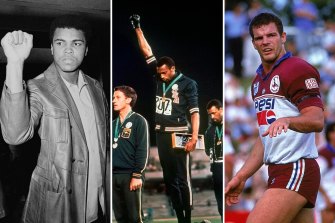 The codes celebrate Indigenous footballers without addressing the underlying racism that prevails on both sides of the fence. They celebrate ‘Pride’ when only a tiny handful of players have had the pride and the courage to come out. They don the symbols of diversity and inclusion before understanding the first thing about the differences these things mean to different groups of people. Like the Sea Eagles, they think good intentions will win them the game.

But these issues are never simple or easy – that’s why they need addressing, for heaven’s sake – and it is baffling how serious cultural matters can be thought of as more amenable to simple win-win solutions than, say, the outcome of a footy match, which, in the end, is addressed much more seriously.

The question is, where do sports go from here? Do they continue making the long-term effort to grasp the issues they have so blithely packaged and marketed? Or do they retreat, accept their limitations, and stay in their lane?

They don’t seem to know. On Tuesday morning, ARLC chairman Peter V’landys was saying sport was a place people come to when they want to forget about politics and social division. Later that same day, he was saying the league would consider a Pride Round. Sure, we’ll … consider it. And if we find that half of every team will refuse to play, we’ll continue consulting, hoping if we consult long enough the whole world will change. 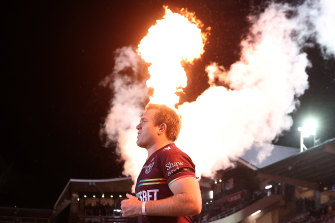 Manly’s Jake Trbojevic runs on to the turf at 4 Pines Park in the side’s controversial rainbow strip.Credit:Getty

Further confusion came from Trent Robinson, the Roosters coach who received plaudits for his empathy and sincerity. Clearly Robinson is a good guy who means well. But listen to his words: LGBTI people ‘make choices’. They have a ‘sexual preference’. Their suicide rate is high compared with ‘normal’ society. Fortunately more people were feeling the nice vibe than listening to the words, which only showed how far even the most empathetic have to travel before they reach understanding. And then Robinson sent onto the field players who have committed assaults against women, racist slurs, and Victor Radley, who had just been fined for mimicking a sex act on national television. Before these sportspeople presume to the role of educators, they might have a crack at getting educated themselves.

A few years ago, a great Sydney University history lecturer named Bob Dreher taught about the failure of liberal societies in mid-20th century Europe. To wake up today’s students, he drummed home the difference between tolerance and indifference. Democratic societies thought they were tolerant of diverse others and ethnic minorities, but actually they were happy to have good intentions and get on with their lives. When confronted by brute force, they folded in an instant.

Indifference, Bob said, seeks the easy path. Tolerance involves thinking our values through, reinforcing them with experience, testing them in confrontation, understanding that win-win is a commercially-appealing mirage.

Tolerance should be natural for sport. Respect for the other is, after all, the fundamental contract of competitive games. Sport at the highest level is not about ease, it’s about sacrifice. For the individual, it’s about not having it all your own way. For the club, it’s about how to accept losing. Perfection simply doesn’t exist.

Instead, what we’ve cringed at this week is the illusion of fantasy league: not just the fantasies of religious belief but the fantasies of marketing, the glib commodification of social issues and the empty seductions of a perfect world.

If anyone should understand that life isn’t like that, it’s those involved in sport. If pro sports want to maintain their ambition as social leaders, Manly have unwittingly, blunderingly, shown them the way this week. A contest of ideas is just like a sporting contest, and whenever someone wins, someone else has to yield; if you want to enter these deep waters, you might like to think through the consequences.