If Ryan Papenhuyzen was paid his true worth, he might be able to afford a haircut.

The Melbourne Storm fullback is, if not the best player in the National Rugby League, certainly in what they like to call The Conversation. He won the Clive Churchill Medal for his performance in the 2020 grand final and is repeatedly the dynamo in the Storm machine, his smarts and speed contributing the sprinkle of fairy dust to his club’s everlasting success.

Better than Tom Trbojevic? James Tedesco? Although the Storm can win without Papenhuyzen, so he is not quite as essential to his club, he is in their class. Craig Bellamy would not trade his No.1 for any other. Papenhuyzen is such a star, he has even won over many a Storm-hater; he is just a dazzling footballer, and when he tilts that funny-shaped head to two o’clock and tucks the ball under his arm, there is no better sight.

Despite the visual evidence, Papenhuyzen has been taking a haircut all along. His current salary does not figure in the top three, the top 10, the top 50, or even the top 100 NRL players. What do Corey Norman, Josh Dugan, Anthony Milford, Moses Mbye, Dallin Watene-Zelezniak and Valentine Holmes have in common? All are utilities-slash-fullbacks, all paid considerably more than Papenhuyzen.

At current valuations, you could get three Papenhuyzens for one Ben Hunt. Matt Moylan could be paid for half a season and still pocket more than Papenhuyzen. Even within the Storm, Papenhuyzen is on junior’s wages. He has just signed an upgraded contract, reportedly worth $2 million over three seasons. If so, he will still be earning less than Chad Townsend or Luke Brooks.

If you’re wondering what the Papenhuyzen is going on here, you have stumbled across the answer to why Melbourne continue to dominate the NRL year after year, why they will also win the minor premiership next year and the year after. They have found the secret to beating (not, any more, cheating) the salary cap. 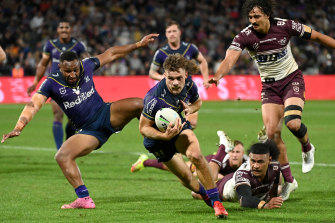 Ryan Papenhuyzen helped the Storm destroy Manly in the first week of the finals.Credit:NRL Photos

Papenhuyzen signed for Melbourne in 2019 on considerably less than the $600,000 the Tigers were then prepared to offer him to return to his first club. He wasn’t driven by money; he was driven by Bellamy. Before penning his extension this year, Papenhuyzen wanted assurances that Bellamy would continue to coach Melbourne. Bellamy duly extended. The young fullback is a smart fellow: he wants to learn from the best coach and win premierships.

Melbourne have kept their team together with the Bellamy discount. In Harry Grant and Brandon Smith, they have the NRL’s best two hookers. Thanks to the Bellamy discount, neither earns in the top three. Smith is flirting with other clubs but will inevitably continue winning premierships with Melbourne while being paid “unders”.

The Storm have taken the economic motive out of contracts. Justin Olam is one of the best outside backs playing, yet the NRL hasn’t yet heard of him (he can’t even get an invitation to the Dally Ms); he is another bargain buy. Melbourne’s meat-and-potatoes forwards, representative stars all, are paid quite a lot less than Russell Packer or Andrew Fifita. Weaker clubs pay a premium for weaker players. Melbourne get a discount on champions. Some animals are more equal than others.

Nice business if you can do it. This is no criticism of Melbourne, who, unlike the Roosters, have developed their own premiership-winning key players. They can lure and retain their footballers with a credible promise of glory and personal growth. The Storm turn pumpkins into fine carriages, who turn back into pumpkins when they leave. If those players eventually want a financial dividend after making sacrifices to represent Melbourne, they can get it from another club later in their career (Josh Addo-Carr, Dale Finucane, Adam Blair) or from rugby (Suliasi Vunivalu, Marika Koroibete). There will always be a buyer ready to pick up something second-hand from the Storm. 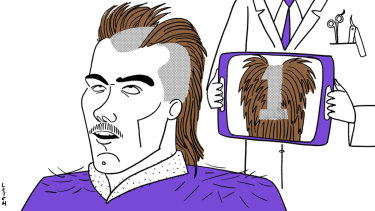 It’s the perfect loophole in a salary cap system stuck in the past, where the dollar was the “objective” way to value players. The cap was meant to even the competition out: give advantages to the weak and take them away from the winners. But when a million-dollar player decides to play for unders, the assumption underlying that system – that money drives the players’ decision on where they play – cracks.

When a whole group of players buck the financial motive, the cap has finally failed. Instead of being penalised, Melbourne have been rewarded for their success: they get Ryan Papenhuyzen for the same portion of their salary cap as the Tigers, say, get Adam Doueihi. And you wonder why your team will finish in the same spot next year.

The NRL does nothing about this because, among other reasons, it likes the Storm. The league holds up the Storm as a model for other clubs. Storm players say their pleases and thank yous and turn up to meetings properly dressed and on time. The Storm can’t beat the AFL – hence their adjusted timeslot when they play Penrith in Saturday’s preliminary final – but they can, and do, beat the NRL. 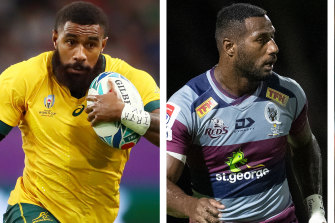 Marika Koroibete playing for the Wallabies and Suliasi Vunivalu for the Reds.Credit:Getty

To anyone other than head office, this idealism is somewhat daft. Newsflash: there can only be one winner. So you can’t actually be like Melbourne if Melbourne are still being like Melbourne. There is only one Bellamy, and they’ve got him. The 15 other clubs can copy everything Melbourne does and improve their “culture”, but one of them is still going to receive the wooden spoon. It is a zero sum game. So when it thinks it is holding Melbourne up as an incentive, the league is instead creating a positive feedback loop where the more a club wins, the more top-quality footballers will discount their market value to fit into that club’s cap. Like all the best market manipulations, it’s totally legal.

An AFL-style draft would begin to fix inequalities, plus a more considered, fair and rational system for valuing players than a broken marketplace; but the NRL is still to show an interest. It is tediously obsessed with competing against the AFL, but in its eagerness to showcase its southern team, it has created a same-old same-old competition, whereas the AFL, which has a functional salary cap, this weekend puts on a grand final to capture the imagination between a team that has not won since 1964 and a team that has won once since 1954.

Bringing to mind the doctor who declares the operation a success notwithstanding the death of the patient, the NRL will proudly declare this season one of terrific achievement and resounding superbness, notwithstanding its failure to organise a fair competition that gave 90 per cent of fans any remote hope of seeing their club succeed.

Meanwhile, if you want to know why we love league, watch Papenhuyzen.

And don’t tell him he needs a haircut; he’s already taken a big one.

Tags: heirs:, Papenhuyzen, Splitting
You may also like
Latest Posts