That was one hell of a game of rugby league. For three players, hell was all it was. They were all done within four minutes of kick-off, all concussed. Under a full moon, all they saw was stars.

Maybe it was because it all happened so quickly, but this carnage appeared to inflict collateral damage on the commentary. It was logged almost as a scoreboard item, reducing Queensland to two on the bench and NSW to three. 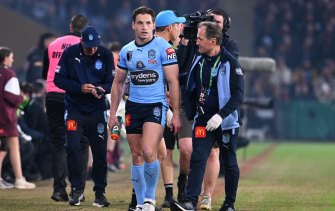 NSW’s Cameron Murray is assisted after sustaining a head injury during the State of Origin decider on Wednesday night.Credit:Getty

Because it set the tone for what was an unusually bruising – and therefore compelling – encounter even by State of Origin standards, it became over the course of the night very nearly celebrated. More troubling even than the harm done was the way it was glossed over.

“What an extraordinary start to the Origin decider,” exclaimed caller Mat Thompson. “Physicality like we have not seen it before.” At the rate of a casualty a minute, was it physicality we should not see again?

I realise that the surest way for a Melburnian to get his nose figuratively broken is to poke it into rugby league. I admit to no particularly profound knowledge or understanding of the code and its culture. I bring to this topic an AFL sensibility.

But this is about all football codes, all games. All are grappling with the issue of head knocks and their consequences. It’s front and centre. Even soccer is brainstorming the implications of heading. 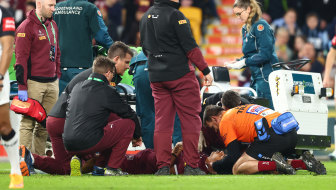 Selwyn Cobbo of the Maroons is attended to by trainers in the State of Origin decider on Wednesday.Credit:Getty Images

All say they are trying to minimise the incidence of head injury. What they don’t or can’t say is that they won’t act in any way that strips out or even circumscribes the gladiatorial essence. In collision sports, that would be impossible anyway.

No code articulates what level of risk and injury it would tolerate. It’s too hard. But you might have thought that three concussions inside the first four minutes of the most watched game of the season might at least prompt a conversation. That should be possible without prejudice to the skill and courage of those who play the game, which speaks for itself.

As bigger, stronger, faster players in contact sports fill up arenas unchanged in size, the heaviness of the impacts increases accordingly. The violence is not as wanton as it was once, but the damage sometimes is as severe.

The best and worst of that early rash of concussions on Wednesday night is that no one was conspicuously to blame. Best, because it was clear there was no malign intent. Worst, because it means there is no obvious way to avoid or mitigate it. In a collision sport, accidents happen. 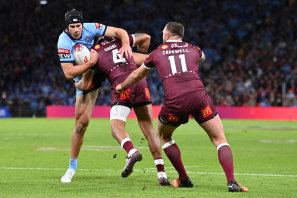 Dane Gagai and Matt Burton and the so-called “biff”.Credit:Getty Images

The reality is that both AFL and rugby league are objectively cleaner and notionally safer than they ever have been, perhaps as clean and safe as can be. But three concussions in three minutes would and should rattle the most complacent minds.

If no fault could be apportioned then, there was egregious fault all the way up the line in the second after a punch-up between NSW’s Matt Burton and Queensland’s Dane Gagai. This also was celebrated. “Don’t worry about the try boys, it’s an all-in back on the 30-metre line,” one commentator hyperventilated.

Here also was a reversion to type. “Biffo” was back, and 24 hours later, there was still rejoicing in many quarters. Both players were sin-binned, but extraordinarily, neither was suspended. Instead, piddling fines were imposed. In any other sport short of cage fighting, naked fisticuffs like this would incur long suspensions. In rugby league, the combatants had to give back their pocket money.

A commonly heard epithet for the State of Origin decider was “retro”. To the extent that this meant revival, that was unarguable. But it was also unarguable that in one aspect, it was for sport generally a backward step.