A contrite Jahrome Hughes insists he would never intentionally disrespect a rival or region after being outed by the Panthers as the main offender a video that allegedly mocked the Mt Druitt roots of certain Penrith players.

Penrith centre Stephen Crichton told The Sydney Morning Herald and The Age on Tuesday that it was Hughes who played the starring part in a video filmed during the Storm’s 2020 premiership celebrations. That same footage was later used by Penrith as inspiration for their preliminary final victory over Melbourne last year.

Assistant coach Cameron Ciraldo saved the clip and reminded players before the match: “You need to protect where you come from.”

“There was a short video, they were doing the [hand] signals and doing the dance,” Crichton said. “The boys didn’t want to use it as hate, where we came out and try to force things and give penalties away … [but] ‘Ciro’ [Ciraldo] said, ‘You need to protect where you come from’.

“We play hard because not many people from Mt Druitt get into this position like us. When you see videos like that, they can’t stick up for themselves, but those of us on the field can. We played for the area and our families and it was good we could come away with the win.

“It was mainly Jahrome Hughes, he was on the drink, like most of the first-grade boys after you win a grand final. We did the exact same thing when we won a grand final. But it was a bit of motivation for us heading into that prelim.” 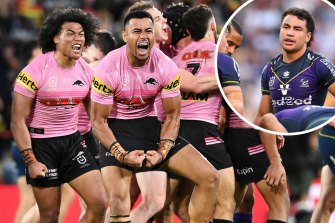 Melbourne meet Penrith on Saturday night in the blue-chip clash at Magic Round in Brisbane, with Hughes saying he didn’t believe there was any ongoing bad blood and it wasn’t in his nature to be disparaging of anyone’s background.

“It was obviously after a couple of days on the drink, I can’t really remember the full extent of the video. I’m disappointed that it came out like that, that’s not me and not what I’m about. I didn’t mean to disrespect anyone or any area,” Hughes said.

“There was no intent there. There is no bad blood from me but they used the video as a bit of motivation. That’s not good but I can’t do much about it now. There is no excuse, obviously.”

Hughes said he was yet to apologise to Penrith players and for a time was unclear what was even in the footage. But he has now gone on the record with an apology and said it was clear the vision had upset the Panthers.

“They made it pretty clear they were disappointed about it and so am I,” he said.