Sydney’s two AFL clubs and the league are looking to put a submission to the Victorian Government for a transition hub to be used so that players can be reunited with their partners and families.

As Sydney’s coronavirus crisis worsened on Friday and NSW Premier Gladys Berejiklian foreshadowed a possible extension of lockdown, officials from the Swans, Giants and the AFL met to discuss what is shaping as a highly sensitive political issue. 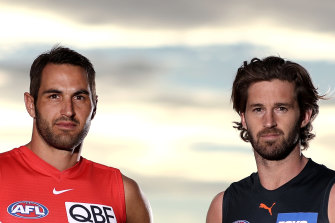 The Swans’ Josh Kennedy and the Giants’ Callan Ward are both fathers who are away from their families due to the coronavirus outbreak in Sydney.Credit:Phil Hillyard

A more realistic scenario is for their loved ones to fly to the team’s temporary base in Melbourne via a possible hub in regional Victoria for two weeks’ quarantine, although that would also require exemptions from Victorian health authorities.

The league organised a transition hub at a Gold Coast resort last year for AFL club families and staff to spend 14 days in quarantine.

The AFL, which is closely monitoring the situation in NSW, wrote to the players association last month pledging that players would not have to spend more than three weeks away. That now seems a promise they will be unable to keep even if they have committed to returning players home as soon as possible.

The Swans and the Giants had come to Melbourne initially thinking they would spend two to three weeks away, but that stay is almost certain to be extended after NSW recorded another rise in COVID-19 cases on Friday.

There is some agitation that there would be more headway being made if the Victorian teams were the ones being stranded rather than the two Sydney-based clubs.

The Sydney clubs are fortunate in that many of their players are from Victoria and have family networks they can access while in Melbourne.

The AFL is yet to reach a decision on where next Saturday’s Sydney derby will be staged. Canberra remains the favoured location but that hinges on whether the Victorian Government brackets the ACT with the rest of NSW.

If Canberra is not an option, there are contingencies for the game to be played in Melbourne or possibly in regional Victoria. If the match was to stay in its Saturday time slot, it could be played at Marvel Stadium as a the first leg of a double header, as the Giants game against Melbourne was last weekend at the MCG.

Swans coach John Longmire said his players were treating each day as it comes amid a period of great uncertainty.

“You have to be really mindful in these situations you don’t spend all your time thinking about the what ifs,” Longmire said.

“You can spend all your energy thinking about the what ifs. We trust the club and the AFL are doing all they can to come up with solutions to get us home first and foremost and to support our families and loved ones back home.

Meanwhile, the Giants have recalled forward Jesse Hogan after just one game back from injury in the VFL. Hogan replaces Jeremy Finlayson, while reliable defender Sam Taylor resumes having not played since round 10 due to an ankle issue.

The Swans named the same 22 who thumped West Coast.

Tags: and, Giants, S, stranded, Swans, to
You may also like
Latest Posts