‘We wouldn’t make a great boyband!’: The three (not so little) piggies of Bath’s front row on why it’s cool to love scrummaging… and mullets!

When Bath supporters hark back to the glory years of the late Eighties and early Nineties, their fondest memories often involve a bunch of ugly front-row forwards who enjoyed manning the pub doors on a Saturday night.

The likes of Gareth Chilcott, Victor Ubogu and Graham Dawe were unlikely poster boys but they paved the way for years of success.

It is more than 24 years since Bath got their hands on the Premiership trophy but the club are now plotting their way back to the top.

Their play-off push has been built on similar foundations — an eclectic, grizzly group of props and hookers — and the Mail on Sunday sat down with three of the leading lights. 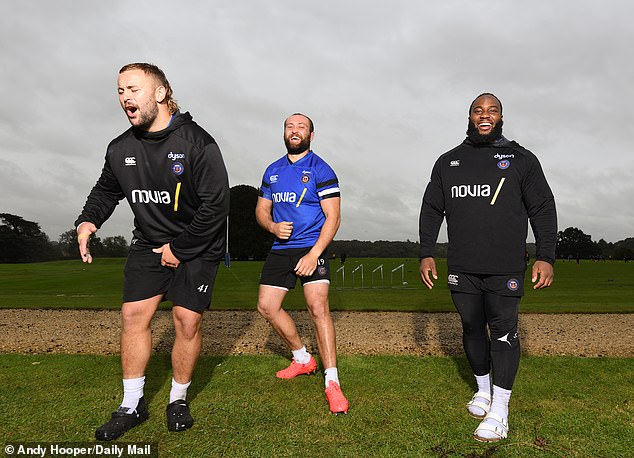 BENO OBANO: So you wanted to do an article on ‘The Front Row Club’, hey? It shouldn’t just be the three of us doing this interview, you know. There’s Lewis Boyce, Christian Judge, Jack Walker and everyone else… can we not get all of us together?!

WILL STUART: There are 16 of us, back through to the academy. All slightly odd blokes!

So, what’s life like in the front-row club? You must get through quite a bit of food!

OBANO: I’ve never met a normal prop. It’s not something for your average Joe. Everyone’s a little bit peculiar. The more peculiar, the better!

STUART: You’ve got to be a little bit tapped.

DUNN: It’s usually the fat kids who have lost a bit of weight. The leftovers! We’re a very diverse group but we’ve all got a common goal. We all want the same thing and that’s to be at Twickenham on October 24.

STUART: This is my first year here. Before I joined the club, Stuart Hooper and Neal Hatley [director of rugby and head coach] spoke a lot about the building blocks to make us as dominant a side as possible. Scrums, mauls, hard carries. You’re only one game away from getting a pasting but, so far, it’s been going well.

DUNN: We have proper competition in training now. We can do good-quality, live scrums in training and that’s a six-man effort. Not just Stuey, Beno and me. Guys are popping their eyeballs out down there. I remember Davey Wilson, at every hard session on a Tuesday, would burst all the blood vessels around his eye sockets. He’d have little red dots all around his eye lids because of the pressure of the scrums! He’d hang in there as long as he could. 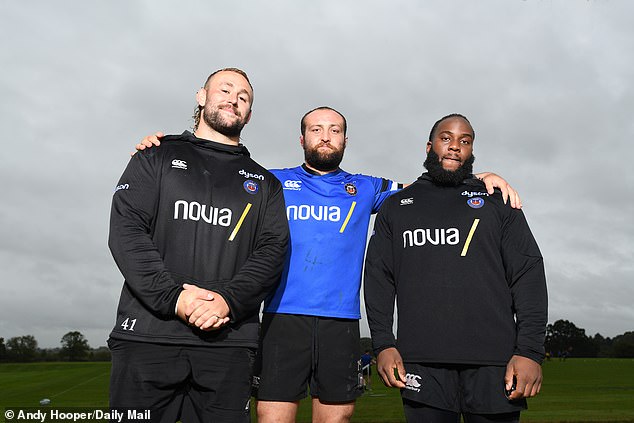 Stuart, Dunn and Obano are hoping to guide Bath to their first Premiership in over 24 years

A lot of people complain about scrums. They argue that they are too slow and cumbersome. Some people think they take away from the excitement. How do those views go down?

OBANO: Sport is about fear, right? It’s part of the entertainment. Scrums build up a lot of tension in the game. If it’s a 15-all draw in the final minute and there’s a scrum on the 22, that scrum becomes pretty important. They’re big moments.

DUNN: What do people want to see? They love seeing Anthony Watson breaking from the backfield. Well, nine times out of 10, he’s breaking past a tired prop or a second row. If you take scrums out of the game you take that out of the game, then you’d have 15 fresh boys on the pitch. You would just be running into brick walls.

STUART: There’s also a welfare issue to speeding up the scrums. It’s a massive collision and if we’re not properly set, it could be dangerous. If we scrum like we did 10 years ago it would be a sh*t show. There would be injuries left, right and centre because guys are so much bigger now.

DUNN: Say it takes two or three minutes to get through the scrum, that gives the fast-twitch boys like Joe Cokanasiga and Semesa Rokoduguni some time to recover. If they didn’t have that time, would they still be as explosive? Plus, they keep Will Stuart in a job!

Speaking of Will, he has made a huge impact yet still has a low profile. He’s not done any interviews and is only known for scrummaging and mullets. What’s he like?

STUART: I’m a bit of a media pothole, you see.

DUNN: He’s a social hand grenade! We keep him far away!

DUNN: I’ve been trying to convince Beno to join the mullet revolution. We’re never going to make a boyband. Saying that, I’ve got good memories of him rapping! 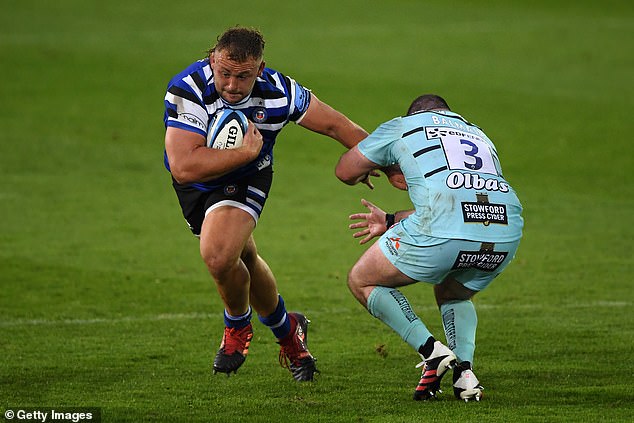 The Premiership table has been finely balanced going into the final weekend. You could secure a home semi-final but it will depend on results elsewhere. Have you been following the other teams? Do you allow yourself to talk about reaching the final?

DUNN: Well I tell my missus I’m watching the other games for ‘work’, so I get a couple of hours off from the kids! After beating Gloucester last week, it’s in our hands. We don’t need to worry about Wasps, Bristol, Sale. We’ve just got to go to Allianz Park and get a win.

STUART: The date of the final is what we’ve been working towards since the start of the year. Obviously that date changed with lockdown but we still want to win it.

DUNN: We talk about the feeling of winning the league. There are a few guys who have done it — Will Chudley, Ben Spencer, Christian Judge — but the majority of us don’t know what it feels like. Imagine that feeling after doing that. 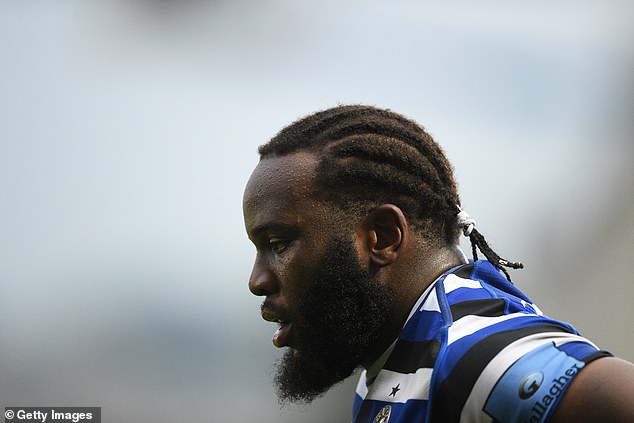 Obano, Dunn and Stuart have all been in and round Eddie Jones’ England squad in recent times 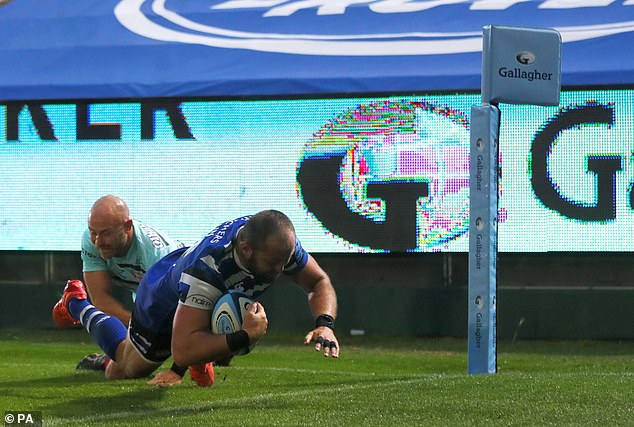 You’ve all been in and around Eddie Jones’s England squads. Beno was called up before a serious injury, Tom has been on the bench and Will made his debut during the Six Nations. How much of a confidence boost is that?

STUART: I robbed a cap!

STUART: This season has been so long that it’s a bit of a haze. I got a WhatsApp message the day before to tell me I was in the squad. I’ve only really reflected on it with my mum!

OBANO: It has to be a motivator. When you see retired guys talking on TV, their names come up and underneath it says: “So-and-so, England rugby player”. You want that. It’s important for your family and yourself to show what you’ve achieved.

Austin Healey has even suggested that Tom is ready for the 2021 Lions?

OBANO: I think so. He’s our little Ken Owens, innit!

DUNN: I was there at Murrayfield, on the bench, during the Six Nations. I’ve been so close that I kind of don’t worry about it now. If I worry about it I’ll end up down a rabbit hole. Winning the league will put me, and the rest of us, in the best position we can be in.

Tags: and, Dunn, hope, Obano, Stuart, to
You may also like
Latest Posts