The Sunwolves will play the Brumbies in a double header with the Waratahs and Chiefs at WIN Stadium at Wollongong next Friday. 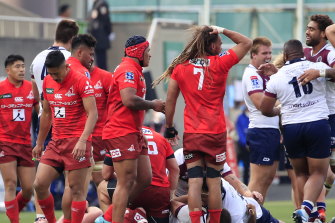 The Sunwolves will stay in Australia after the Hurricanes game.Credit:EPA

The coronavirus threat has also prompted Super Rugby administrators SANZAAR to move the Japanese side’s round seven clash with the Crusaders to Suncorp Stadium in Brisbane. It will be played as a double header before the Reds’ home game against the Bulls.

The Sunwolves are already in New Zealand to play the Hurricanes this weekend and the emergency measures mean they will spend the next four weeks on the road. No decision has been made yet on the side’s late March/April fixtures.

“Super Rugby has been very aware of the effect and ongoing concerns around the coronavirus and it was very clear that we had to make changes to the match schedule to conform with Japanese government requirements and health authority directives, and of course to ensure the well-being of our players and management teams, match officials and spectators,” SANZAAR chief Andy Marinos said.

“For the integrity of the tournament we also believe relocating the matches was the right thing to do regardless of the complexities involved. Due to the fact that the Sunwolves were due in Australia for two matches following the Brumbies and Crusaders matches in Japan, and the availability of stadiums and suitable broadcast windows, the matches have been relocated to Australia.

"This has enabled us to create a series of double-header matches which we hope will prove popular with rugby fans in Wollongong [Sydney] and Brisbane. I urge fans in both cities to come out and support not only their team but also the Sunwolves who now have an extended stay in Australia.”

The Sunwolves vs Chiefs game next Friday will kick off at 2.45pm AEDT.

Tags: and, in, play, stay, Sunwolves, to
You may also like
Latest Posts