St Kilda youngster Ryan Byrnes is set for a delayed start to the season after suffering a serious hamstring tendon injury.

Sources familiar with the situation confirmed Byrnes will undergo surgery this week in a blow that is likely to sideline him for a couple of months. 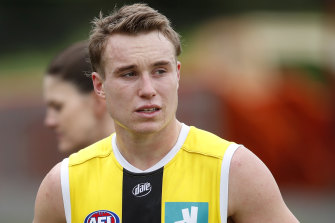 Ryan Byrnes injured his hamstring at a training session at RSEA Park on Friday. Credit:Getty Images

Recruited from the Sandringham Dragons, Byrnes, 19, played a single senior game for the Saints last year after being drafted at pick 52 in 2019.

St Kilda earlier this month announced he had extended his contract for an extra season, tying him to Moorabbin until the end of 2022.

The Saints are due to release an extensive injury update later on Tuesday.

Injury-prone veteran Dan Hannebery has endured another interrupted pre-season with a calf issue.

Tags: B, for, Saints, surgery, youngster
You may also like
Latest Posts