The Sydney Swans are still unsure if Lance Franklin will be forced to significantly change the way he takes set shots as they work through the implications of the AFL’s latest controversial rule tweak.

A calf issue will stop Franklin from taking part in Saturday’s pre-season clash against Greater Western Sydney in Blacktown – the first time either team will have tested the new man-on-the-mark rule outside of internal trials. 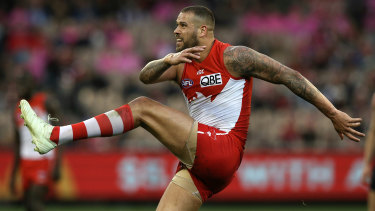 Lance Franklin’s goalkicking routine could be impacted by the AFL’s newest and most controversial rule change.Credit:Wayne Ludbey

Players can no longer move when they are manning the mark and must stay rooted to the spot, with a step in any direction now triggering an automatic 50-metre penalty – the latest initiative by the AFL to increase scoring by opening up wider angles for passes and, theoretically, increasing ball movement.

It means an end to the age-old tradition of players moving around on the mark to try and distract an opposition player lining up a shot on goal.

But it also has implications for Franklin and players like him, who tend to run in an arc favouring their kicking foot to generate extra power.

Umpires are now being instructed to call “play on” as soon as a player deviates from a direct line with the goals they are aiming towards, giving the man on the mark at least some opportunity to affect play.

The Swans have had umpires relocate from Melbourne and oversee training for the past week to help them come to grips with the new rule, but assistant coach Dean Cox said it was still unclear what it means for Franklin.

“We’ve just got to talk through with the umpires about that arc – can he still use it, and come to the line, not start on the line of the kick and then get off it,” Cox said.

“We’ll work our way through that. As soon as you step off the line, it’s on now. You’ve still got that five-metre protected [zone] that you can look at but if you step off that line they’re coming at you really quick. Players have just got to be aware of it, train a bit differently.”

While the early evidence across pre-season scratch matches has shown players have adapted to the change well, Cox expects there will be at least one 50-metre penalty given per quarter on Saturday.

“We’ve had a few here and the boys are like, ‘I barely moved’. You’ve just got to keep replaying and showing it to them – ‘Look, that’s what they’re calling’,” he said. 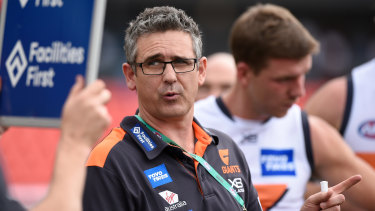 “The pattern of behaviour that players have shown for a long time will get people early … when fatigue sets in, old habits will come and that’s why there’ll be 50s – hopefully not too many.”

Giants coach Leon Cameron said it was too early to say if the change will actually be good for the game, and anticipates fans will be highly frustrated through the opening rounds of the new season when players inevitably give away 50-metre penalties.

“It is really harsh, and it’s hard to change overnight – as in one pre-season,” he said.

“I guess that’s why they’re saying, don’t do it or you’ll cop it. A shot after the siren, someone who stands the mark can’t move, all for the sake of getting either more goals or goalkicking – I understand, but there’s going to be some interesting commentary on it early in the piece.

“Even little things … if you walk around frustrated because you’ve let your man mark the ball and he’s having a shot, well, that’s 50 as well.

“So many rules have been adjusted, some work and some haven’t. Time is going to tell. You just need, probably, a good six-week sample set of it. What I’ve seen in our practice is they’ve adapted really well [but] that will take some time, no doubt, in the heat of battle.”

Franklin, Sam Naismith (knee) and Dane Rampe (managed) will miss Saturday’s clash for Sydney – the first of two the Swans and Giants will play against one another over the next two weekends, and their only practice matches before the AFL season starts.

Tags: 'If, ‘harsh’, new, Ru, Swans, unsure
You may also like
Latest Posts