Western Bulldogs players and staff members have been forced into self-isolation after staffers attended Highpoint, a coronavirus exposure site, on Thursday night.

Multiple sources familiar with the situation said training was cancelled on Tuesday and players and staff were tested on Tuesday morning. They must isolate until they get a negative result. 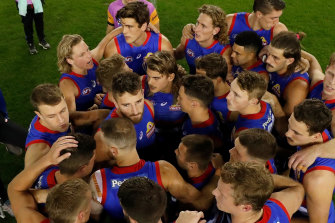 The Bulldogs are in isolation and awaiting negative test results.Credit:Getty Images

Staff members and players began getting tested when sites opened at 8.30am and the last test was conducted just after 10am.

Club officials have been told by the AFL that test results were likely to come back in around six to 10 hours.

The situation has forced the club to move its main training session, originally set for Tuesday, to Wednesday, ahead of Friday night’s blockbuster against Mebourne at Marvel Stadium.

An AFL source told The Age that the hope was all tests would come back negative by Tuesday night and if that is the case there would be little to no impact to Friday night’s game.

A different source, who spoke on condition of anonymity, said players from at least one other Victorian club have been told to avoid shopping centres and large public gatherings after the state recorded five cases of community transmission to Tuesday.

Tags: after, in, isolation, staff, team
You may also like
Latest Posts