Cody Walker and Latrell Mitchell know they’ll be the target of wind-up attempts with premiership hopes on the line, but the South Sydney stars are adamant they will refuse to take the bait.

Rabbitohs five-eighth Walker declared Allianz Stadium is South Sydney’s home after they ended the Sydney Roosters’ season at the Moore Park venue that has become the site of a turf war between the NRL’s oldest rivals.

The Rabbitohs will return to Allianz Stadium to face Cronulla in a semi-final on Saturday night as Jason Demetriou’s squad looks to become the first team to win a premiership from outside the top four during the NRL era.

Walker and Mitchell will be key to South Sydney’s hopes, and the pair have vowed to avoid being lured into emotional warfare as rival teams look to unsettle the superstar duo.

“I think both of us are aware that teams are going to try to bait us and do that sort of stuff to us,” Walker said. “It’s about us being mature and not falling into that type of game and playing our style of footy. That’s what we did [on Sunday].” 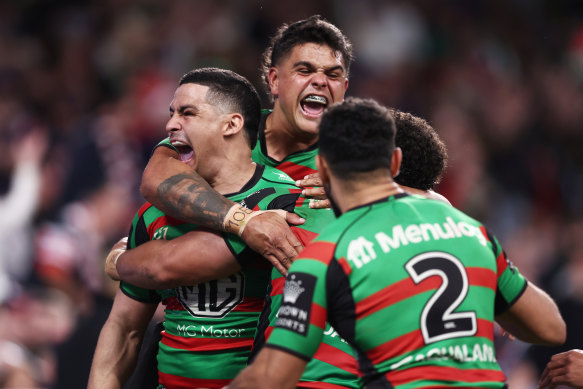 That Walker and Mitchell avoided the on-field chaos in an elimination final win over the Roosters – in which seven players were sin-binned and the Rabbitohs were twice reduced to 11 men – will not be lost on Demetriou.

Rival teams have often tried to unsettle the pair. Walker was targeted with sledges in last year’s grand final and refused to shake hands with Sharks forward Cam McInnes after a game earlier this year.

Mitchell was quiet after being booed by sections of the crowd during a round 25 loss to the Roosters, only to rebound a week later to ignite the Rabbitohs’ finals campaign.

“To have achieved what he has achieved in the game at only 25 years of age is pretty impressive,” Walker said. “Look at my journey, I wasn’t even playing first grade at that age. To see him bounce back and play the way he did, I was really proud of him.”

Sharks great Paul Gallen questioned whether the Rabbitohs will be able to rise to the occasion on an emotional level after back-to-back games against the Roosters, a match he likens to a grand final for the club dubbed the pride of the league.

But Walker is confident there will be “definitely not” be an issue in backing up against a top four side trying to bounce back from a 93-minute epic against North Queensland.

“I love this game of rugby league. Playing at home at Allianz will be good again,” Walker said.

“I don’t think you can discount anyone. It’s crazy how the first week of finals had those grudge matches. I think anyone could win it.”

Stream the NRL finals series live and free on 9Now.