Victorian and NSW finals teams are likely to remain interstate beyond their week one matches in a move aimed at ensuring greater flexibility.

With Melbourne and Sydney locked down, all six finalists currently based in Victoria (Melbourne, Geelong, Western Bulldogs, Sydney, Greater Western Sydney and Essendon) will play in either Launceston or Adelaide this weekend, and are likely to stay interstate as long as they stay alive in the finals. 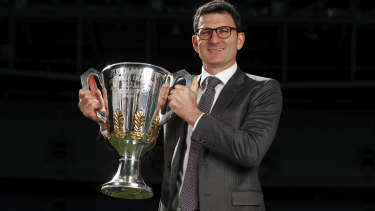 Keeping teams away from a COVID-19-stricken city should aid the path of those teams getting into other states, including Western Australia, which is favoured to host the grand final.

“Week one of the finals, we’ve fixtured those outside of Victoria,” AFL fixturing chief Travis Auld said on Monday as he launched the finals series at Marvel Stadium.

“It’s highly likely we’ll keep those teams on the road and fixture week two outside of Victoria. That gives us [options] beyond that.”

While the Victorian government has conceded that an MCG grand final is increasingly unlikely, the state has not officially relinquished the match yet, which it is contracted to host until 2058.

But Victoria’s COVID-19 situation has led industry sources to suggest the game will almost certainly be moved for the second straight year.

Auld said the AFL had been in discussions with both the WA and South Australian governments and reiterated that a decision was needed soon.

“If you think back from that to prepare ourselves for a prelim final and work back from there, we’ve got less time than it might feel like to make that decision,” Auld said. “So, I’d like to think in the coming days we’d have a view on where the grand final will be played.”

Where the game is held will shape when it is played, with the time difference between WA and the eastern seaboard coming into consideration.

“That will be one of the questions that come up if we have a grand final outside of Victoria – does it then present an opportunity for a different start time?” Auld said.

September 25 was when the grand final was initially meant to be played however with the pre-finals bye scrapped, the match could be brought forward a week to September 18. But the league is keeping open the possibility that the bye could be used between the preliminary final and grand final, potentially also helping with quarantine issues.

Auld also said that Tasmania – hosting its first two finals this weekend – was in the mix to host a semi-final in week two of the finals.

Having been confronted with huge logistical challenges for the second year running, Auld said that navigating the 2021 season hadn’t been any easier than dealing with the problems of 2020, noting that the Delta strain had thrown a devilish spanner in the mix.

Tags: duri, on, Road, stay, team's, THE, to
You may also like
Latest Posts