Magpies premiership player and best-and-fairest winner Dayne Beams has thanked Collingwood for their "understanding, patience and care" as he formalised his retirement before the AFL's list lodgment deadline.

The midfielder has reached an agreement with the club despite having two years remaining on his contract. 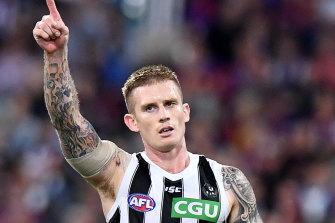 The trio join Ben Reid, Travis Varcoe, Lynden Dunn and Matt Scharenberg as players who either retired or were delisted this season.

The 30-year-old Beams has not played since round 11, 2019, having been unable to train or play in 2020 due to his physical and mental health issues.

He played just nine games with the Magpies after returning to the club during the 2018 trade period on a four-year deal following a stint at the Brisbane Lions that yielded 58 games.

"Challenges remain. That's life. But with experience, understanding and the help of many people I am in a stronger position to deal with them," Beams said.

"I have many teammates and staff at Collingwood to thank for helping me through a particularly tough time. The club's understanding, patience and care were always there and the fact we were able to come to a mutual agreement is important to me."

The 27-year-old Wills played 23 games, with his best patch of form coming at the end of 2019 when he played six games straight. That run ended when the Magpies lost the preliminary final to the Giants.

Appleby played 11 games for the Magpies after joining the club via the rookie draft.

Hawthorn also announced their decision to delist Harry Jones and Mathew Walker while offering Changkuoth Jiath and Keegan Brooksby one-year deals as rookies. The Hawks also delisted Dylan Moore but will add him to their rookie list.

Meanwhile, Melbourne's Kade Kolodjashnij has decided to retire after battling with concussion since joining the Demons. He played 78 games with the Suns but managed just two with Melbourne, the classy left-footer unable to recover from the head knocks he received to make his mark.

"I have had a bit of time to think about the transition and the retirement, unfortunately concussion got the better of me over the last four years or so," Kolodjashnij said.

"I wouldn't take anything back, I have learnt and grown so much and just looking forward to the next phase of my life.

"I am back in a pretty good place now. I am exercising and feeling good physically and mentally."